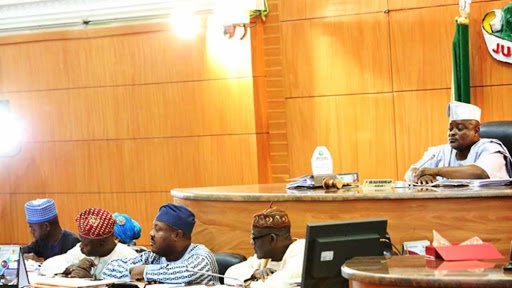 Lagos StGuardian Newspaper ppaper te House of Assembly.
Photo credit : lagoshouseofassembly.gov.ng
It is commendable that in a bid to curb the rising wave of kidnappings in the state, the Lagos State House of Assembly has sent a bill against the menace to Governor Akinwunmi Ambode for assent and passage into law.

To underscore the inhumanity of those who perpetrate the crime, “A Bill for a Law to provide for the Prohibition of the act of kidnapping and other connected Purposes,” understandably proposes thSource ath penalty for offenders whose captive (s) died in their custody and a life sentence for those whose victims came out alive. In the light of an upsurge in this heinous crime, the Lagos State House of Assembly deserves praise for taking this action against such a murderous scourge as kidnapping. It is also time the Federal Government took a decisive action in tandem with the three states -Anambra, Delta and Lagos – that have enacted or are in the process of passing specific laws to deal with abductions.

In October last year, kidnappers struck at the Lagos State Model College in Epe and took away six persons, made up of staff and students. They were released after days in captivity upon payment of a ransom. The trauma of that violent encounter still lingers among all persons. Before then, four residents of Lekki Gardens in Isheri were violently abducted and taken to the creeks. They were also later released, perhaps after the abductors had received a ransom. Indeed, there were other cases of kidnappings which did not catch the big headlines in Lagos and across the country. In some cases, the kidnappers would collect the ransom after killing their victims and many victims have also been known to suffer heart failure during the encounters. Their bodies are usually buried in shallow graves by the criminals. Those who are lucky to return from the captivity of kidnappers tell horrendous stories of torture, starvation and humiliation. In a few cases, the police were able to arrest the criminals.

Last week over half a dozen civic groups in Lagos called on the state government to frontally confront kidnapping. In their view, the era of denial was over. They listed the cases of different persons from 2012 who had been kidnapped in Lagos and concluded that the government was not willing to publicly acknowledge the problem. Recently, indeed, on Friday, January 13, 2017, five persons, three students and two members of staff of Turkish International School Isheri, a border town between Lagos and Ogun states, were kidnapped by armed men. In most, if not all the cases, these criminals demand a ransom which loved ones manage to raise and pay. So, for the kidnappers, it is an avenue to get quick wealth and, therefore, an attractive venture.
The scourge shot up in the last 10 odd years as kidnappers who called themselves militants picked up foreigners, particularly in the Niger Delta, and asked for huge sums of money. To avoid the death of victims, families and companies as well as governments often paid the ransom. Different groups and persons then took to the nefarious trade and made a profession of it. In Delta State, the reign of the notorious Kokori-born Kelvin Oniara, the kingpin of kidnappings in that region was brought to an end in 2013 when he was arrested by men of the State Security Service in Port Harcourt. He and some members of his gang are currently facing trial in Abuja for the abduction of one-time Deputy Governor of Anambra State, Dr. Chudi Nwike, Chief Michael Ozekhome (SAN) and Professor Hope Eghagha (then Commissioner for Higher Education, Delta State). Sadly, Dr. Nwike was killed and his body abandoned on a roadside near Agbor. Also in 2013, another kingpin who operated between Ghana and Lagos, Benjamin Osinachi, (aka China) met his waterloo in the hands of the Special Anti-robbery Squad of the Nigeria Police, after years of terrorising innocent families through kidnapping. Anambra State took the special step of demolishing any house that was used as a hideout or safe haven by kidnappers.

The truth, therefore, is that kidnapping is now a national problem. It requires concerted efforts of all stakeholders in Nigeria and sometimes across the border. This is where intelligence gathering in a proactive manner becomes crucial. The criminals involved use their mobile phones to make calls before, during and after kidnapping their victims. A synergy between the Nigeria Police and the network providers should provide a platform to track the scoundrels. The Federal Government should play a definite and coordinating role in this regard. An effective intelligence structure should be created in order to either nip the crime in the bud or arrest perpetrators of the crime.

The banks also have a role to play. Some of the huge ransoms paid by victims usually end up in the banks. Through proper monitoring, banks should be able to report to the appropriate authorities if a customer starts making cash deposits that are not generated by any known business transactions. Also, with the proper infrastructure in place, people of suspicious character who suddenly start living above their means should be brought to the attention of the authorities. Kidnappers are human beings. They live in communities. They belong in families. In some cases, neighbours and friends suspect them but fear of reprisals prevents them from exposing the crooks.
With fear of kidnapping in the air, people are usually afraid to move around and exercise their God-given, constitution-guaranteed freedoms. For example, businessmen and women would live in perpetual fear as long as kidnappers carry out their criminal activities without fear of being arrested. Also, investors are likely to shun areas where kidnapping is frequent. This would have a terrible effect on the economy of the country, which is already in a recession.

While the Lagos State government’s adoption of the death penalty may be an unfashionable extreme measure, in the circumstance, the Federal Government and other state governments should follow suit with laws that will contain permanently the menace of kidnapping. Trials should not be tedious and unduly long. Witnesses and whistle blowers against kidnappers should be guaranteed protection as part of the efforts to guarantee the safety of citizens and halt the activities of kidnappers.