BY GBOYEGA ADEOYE
She was in the throes of childbirth and needed to get to the hospital fast. Gripped by an excruciat­ing pang of labour, she held her aching waist and hobbled towards the bus station, ea­ger to catch a cab to take her to hospital fast. Just then, a ‘Good Samaritan’, a neighbour named Abdul, drove out of no­where and offered to help her to the bus stop. She heaved a sigh of relief.
“Help has come at last,” Am­ina Usman, a Nigerian mother of four girls, who was about to deliver her first boy, must have intoned.
Unknown to her, she had just boarded a car driven by a Satan incarnate who took her to desti­nation death.
In his dark and clandestine search for either power or wealth or both, the brute drove the hap­less pregnant woman in labour to a bush. What happened next is the stuff that epic horror movies are made. The animal drew out a cutlass and slashed the woman’s head almost in half. Then, he sev­ered vital parts of her body for reason only he could explain.
The gory incident happened on Monday, July 13, 2015, in Yeji, Brong Ahafo Region. Since then, the community has been in deep mourning, and the suspect has been cooling his feet in police detention.
Umaru Amadu, a relation of the deceased, fought back tears several times as he led a dele­gation of the bereaved family to Sunday Sun office on Tuesday.
Recounting the account of the husband to the murdered wom­an, Ahmadu Mohammadu, the delegation leader said the grue­some murder occurred in the wee hours of that black Monday.
According to him, Amina had spent the previous night in pain. From her wriggling, and the kicks she complained she was getting from her lower abdomen, the man said no one needed any soothsayer to know that her time to bring forth her brand new baby was ripe. Her husband, Ah­madu Mohammadu, was agitated because it was too dark and too risky for them to embark on the journey to the nearest hospital in Yeji. It was in the small hours of the night.
Finally, what seemed like an endless night soon yielded to a brand new morning. It was time to dash off to the hospital. Father of Ahmadu, the husband, took a bicycle and raced to the bus park to arrange for a vehicle that would convey Amina to the hos­pital.
Just then, like a bolt from the blues, Abdul, neigh­bour-turned-murderer, ap­proached Amina and offered to help her to the bus station, where her father in-law was al­ready waiting. For someone who was under severe pang of labour, the woman saw the offer as god-sent. Without hesitation, she sauntered into the car and Ab­dul zoomed off on a journey that would never see his passenger back to life in one piece.
Trouble started when they approached the bus station and Abdul would not apply the brake. Rather, his leg sank deeper into the accelerator and, in a flash, the vehicle zoomed pass the bus station, leaving the woman’s fa­ther-in-law, who had been wait­ing for her arrival, in a quandary, totally oblivious of the fact that Amina’s journey had been fatally diverted.
By this time, sweat had begun to form on Amina’s forehead, as she reportedly pleaded with her abductor for mercy. But Abdul would not bulge. He had made up his mind to kill and nothing would change it. She cried and yelled but her plea fell on deaf ears.
The vehicle veered into a nearby bush and shrieked to a halt. Amina’s effort to jump out of the car and run for dear life was turned to a mirage. As she attempted to open the car door, gripped by fear and trepidation, Abdul launched out with a cut­lass. She jumped out of the car and ran as fast as the legs of a woman in labour could with­stand. But it was an effort in futility. Abdul dealt her a severe machete blow that cut her head almost in half. Amina fell with a thud. Her blood gushed out as her face became a mask of hor­ror. But daredevil Abdul hadn’t finished his devilish mission. A mission to snuff life out of Amina totally before removing some of her vital parts. He inflicted more machete cuts, this time to the neck and leg.
Now sure that the mother of four was stone dead, he brought out a knife and clinically re­moved her left breast and private part before bolting away in his car, blood dripping from the hu­man parts he had removed.
Umaru Amadu, who spoke on behalf of the family of the late Amina’s husband, said a man, Tokosi, who was working in his farm that Black Monday, watched in horror as Abdul car­ried out the dastardly act. It was Tokosi who rushed to the police station to report his gory find. Not too long after, Abdul was arrested. He is now cooling his heels in a police cell.
“Abdul is a Ghanaian, also liv­ing in Yeji,” Amadu said. “Amina thought he was offering to render a sincere help, so, she entered his car when he offered to take her to meet the father in-law at the bus station.”
When the police got to the scene of the crime, they only met the mutilated body of Amina. They deposited it in the morgue of Roma Hospital, in Yeji.
“Ever since the incident hap­pened, the family has been in deep grief,” Amadu continued with an emotion-laden voice. “Amina had four children, all girls. The first one is Mariam, who is 10 years old, and the last one, Hazumi, is just two years old. But when pain forced Amina to deliver after her assailant had overpowered her, she delivered a baby boy.”
The baby also died. Its lifeless body was deposited with that of his mother at the Roma Hospital morgue.
-The Nation 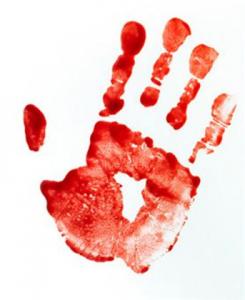