By Evelyn Usman & Ebere Aham
LAGOS—A police corporal attached to Isheri-Oshun Division in Lagos, Wednesday night, fired a shot at a moving tricycle along Isheri/ Ijegun road, killing the wife of the operator, Idongesit Ekpo, on the spot.
Doctors at Lagos University Teaching Hospital, LUTH, are however, battling to save the life of the operator, Godwin Ekpo, who was reportedly also hit by a bullet.
Consequently, visibly angry Lagos State Commissioner of Police, Mr Fatai Owoseni, has ordered the immediate arrest of members of the team on duty that night.
The arrested team members include Sergeant Benson Ahambo, Corporal Augustine Telenundu, Corporal Onu Samuel and Corporal Musefun Aremu.
DPO queried
Owoseni has also queried the Divisional Police Officer in-charge of the division for allowing his men to operate without a properly labelled Police vehicle.
Information at Vanguard’s disposal had it that the tricycle operator was returning from church with his wife and four children between the ages of 1 and 12 in the tricycle, popularly known as Keke Marwa, when the police corporal flagged him down.
It was also gathered that tricycle operators usually gave the policemen between N50 and N100 in the morning and also at night.
But Ekpo was said to have refused to stop to give the policeman money, arguing that the passengers were his family members.
Eye witnesses alleged that the corporal fired some shots into the moving tricycle, thereby forcing it to a halt. The bullet was said to have shattered Mrs Ekpo’s skull while her husband was hit in the jaw.
At that moment, Ekpo reportedly managed to come down and raised the alarm when he discovered his wife in the pool of her blood.
On noticing the magnitude of his action, the corporal reportedly alerted his team members and they all fled the scene.
CP reacts
Reacting to the incident, the police commissioner said: “The command has quickly responded to the incident.
The Deputy Commissioner of Police, Operations, Mr Johnson Kokumo, has been with the tricycle operator in the hospital.
‘’We will do everything within our capacity to ensure that the children and their father are well taken care of at the moment.
“In furtherance of the Inspector General of Police’s stance that the Nigeria Police will not encourage or tolerate any act of barbarism, lawlessness, misuse of fire arms, the corporal that is involved has immediately been taken into custody this morning( yesterday) with necessary disciplinary measures completed.
‘’He has been charged for murder and will be taken to court tomorrow (today). The DPO has also been issued a query for disobeying the IGP’s instruction that policemen should go about their duty in properly labelled vehicles and be properly dressed.
‘’We have also extended disciplinary measures on the team leader and other policemen with the corporal.”
Tricycle operators protest
Meanwhile, tricycle operators took to the streets yesterday to protest the shooting and excesses of policemen attached to Isheri- Oshun station.
The operators, who called on the Police high command to address the issue before it got out of hand, alleged that policemen from the division used the stretch of that road as haven for extortion.
One of them who simply gave his name as Mukaila, said: “Policemen from Isheri-Oshun Division are making life unbearable for us. We pay N100 in the morning, N50 in the afternoon and N100 at night.
‘’If we fail to give them the money, they will seize your keke and dare us to go and call the CP. That is what they do to Okada riders too.
‘’If you challenge them, they will seize your keke and threaten to shoot you. At times, they will even shoot to put fear into us. It is unfortunate that our colleague’s wife was killed in a reckless manner.”
CP visits scene
The command boss also visited Area ‘M’, command, Idimu, which oversees Isheri-Osun Division and, thereafter, proceeded to Ijegun where the protesters had gathered and appealed to them to be calm, assuring that justice would be done.
A female human rights activist, Chinazo Ifechie, who was among the protesters expressed disdain over the manner the DPO at Isheri-Oshun handled the matter.
She told the CP: “ When I got to the station, the policemen beat me up and seized my phone and camera right in the presence of the DPO. As I speak, my phone is still with them.”
Immediately, the CP left for Isheri-Oshun Division where he addressed the policemen and also ordered the release of the activist’s phone.
A relative of the operator, Elizabeth Iniebong, told Vanguard that her brother, Ekpo, was given the tricycle on hired purchase just last month, after staying at home without a job.
‘’Even the wife just recovered from an ailment. They also packed into the area recently. I don’t know why this is happening to us now,” she lamented.
As at yesterday, the children;,Mary, 12; Blessing, 9; Abraham, 7; and 11-month-old Elijah were at the Area ‘M’ command under police protection.
Vanguard 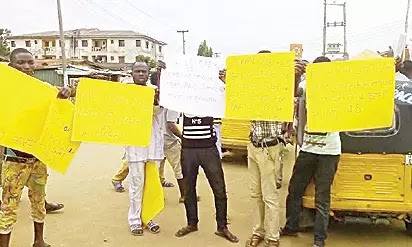