Police parades soldier, 9 others for robbery, kidnapping in Port Harcourt

An Army private, Elijah Owoh, who absconded from his duty post in Biu, Borno state was among the ten suspects arrested and paraded by Rivers Police command for robbery before Rivers state Governor, Nyesom Wike.
The state Commissioner of Police, Chris Ezike, who paraded the nine other suspects before Governor Wike and the acting national chairman of the Peoples Democratic Party, Uche Secondus, and a cross section of journalists today, at the Police Command Headquarters said the soldier shot and killed a male victim during a robbery operation.
“Owoh, during investigation confessed his involvement in a robbery incident in which a male victim was murdered around Eneka Farm road in Port Harcourt.
“He admitted being a Private with service number 12NA/68/7580-93 of 231 Battalion Biu, adding that, he fled the fight against Islamist sect, Boko Haram in North-East,” he said.
Ezike said an AK 47 rifle with 90 rounds of ammunition in three magazines; a coloured Mercedes Benz car with fake registration number, Lagos MS 301 KJA, were recovered from the suspect.
The Rivers Police boss, also said police detectives trailed and arrested a gang of three armed men around Elekahia, Port Harcourt, who specialised in kidnapping and killing of their victims.
Ezike said the gang had on July 5, abducted one Friday Ozogo, who for inexplicable reasons killed and buried their victim in a shallow grave around Choba waterfront in the state.
“Unfortunately, despite their callous actions, the kidnappers continued to harass the victim’s family for ransom, and have collected over N500,000 before police tracked them down.
“The victim’s corpse has been exhumed and taken to the mortuary for autopsy while positive identification has been confirmed by the family,” he said.
The Commissioner said two locally made pistols and 7.62mm ammunitions were recovered from the suspects.
Similarly, Ezike said his men had apprehended a notorious kidnap kingpin (name withheld), while trying to collect ransom from relations of a Lawyer who was abducted on July 21 in Eleme, Rivers.
He said that through the arrest, the police rescued the kidnapped lawyer and arrested two other members of the gang which included a suspected witch doctor.
“During interrogation, the kidnappers revealed that they were contracted to execute the job for N1 million, and were given 20 per cent mobilization fees.”
According to Ezike, one locally made revolver with six rounds of ammunition was recovered from the suspects.
The police also paraded four women and two male teenagers for their alleged involvement and conspiracy in the theft of a seven-month old baby girl.
“The suspects confessed to have conspired and sneaked through a broken window at night and quietly stole the child at her parent’s home at Mile 2, Diobu, in Port Harcourt.
“The baby was taken to Nekede, in Imo state, and sold for N200, 000 to one Nkechi Anyanwu, 45, while two female accomplices of Anyanwu who resides in Owerri were equally arrested.
“The child’s mother, Mrs Rose Friday reported her child’s abduction from her residence at the Mile One Police station,” he said.
Ezike said that Police Mobile Force Personnel, Tactical Units and Special Detectives has been deployed to combat cultists, armed robbers and kidnappers terrorising residents in Eleme, Ubima, Aggah and Emohua communities.
Governor Wike in his reaction said government would take the fight to the hideouts of criminals and pre-empt them before they strike.
He assured that the Government would provide the police with logistical supports to enable them effectively fight crime in the state.
“This time, we are not going to wait for bad boys to continue to terrorise our people and the business community.
“It is important to take this war to wherever they are because we will no longer wait for them to strike before we go after them,” Wike said.
-PmNews 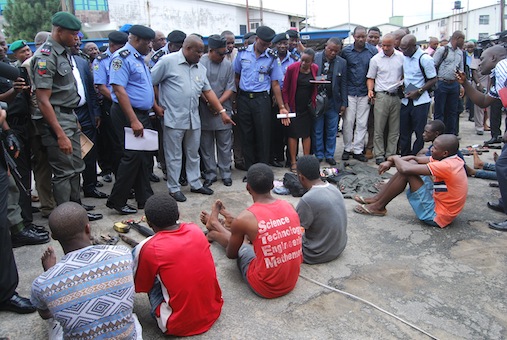