A 19-year-old Pakistani, Iftikhar Arslan, was on Thursday sentenced to 18 months in prison by Justice Chukwujekwu Aneke of the Federal High Court, Lagos, for importing 25. 4kg of heroin.
Arslan, who said he was a medical student in Pakistan, pleaded guilty to the charge preferred against him by the National Drug Law Enforcement Agency (NDLEA).
The convict however pleaded for leniency, claiming that he did not know how the hard drug got into his bag.
“I am a medical student from Pakistan and I truly do not know how the substance entered into my bag.
“I beg this court to have mercy on me.
“My education and career will suffer and be destroyed.
“I don’t have anybody here in Nigeria because my people are in Pakistan,” Arslan said.
In his ruling, Aneke sentenced the convict without any option of fine.
He said that Arslan’s conviction and sentencing was in accordance with the provisions of Sections 281 and 285 (2) of the Criminal Procedure Act, Laws of the Federation, 2004.
“This sentence will take effect from the day of his arrest.
“And I also order that the imported hard drug should be destroyed 30 days after this ruling if no appeal is lodged,’’ the judge said.

Earlier, NDLEA Prosecutor, Fingere Dinneys, said the convict was arrested by some NDLEA operatives on April 5, 2014, during the inward clearance of a Qatar Airways flight from Doha.

The prosecutor said the convict was arrested at the E-Arrival Hall of the Murtala Mohammed International Airport in Ikeja, Lagos.
He said the convict imported 25. 4kg of heroine without lawful authority.
He said that the convict confessed to the crime during interrogation in his statement before the NDLEA officials.
He told the court that the substance found on the convict proved to be hard drugs when it was tested at an NDLEA forensic laboratory.
The prosecutor told the court that the offence contravened Section 11 (a) of the NDLEA Act, Cap N30, Laws of the Federation 2004.
(NAN) 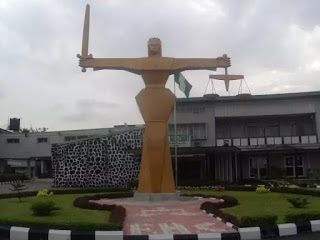