A Federal High Court in Abuja yesterday rejected a complaint by Senate President Bukola Saraki against a suit seeking to sack him and other principal officers of the Senate elected under the controversial Senate Standing Orders 2015.
His counsel Sikiru Oke told the court yesterday that he appeared for the Senate President “in protest” and has not filed “memorandum of appearance” which must be filed before a lawyer could enter appearance for a party in a case.
-Nation
The proceedings were in relation to a suit marked: FHC/ABJ/CS/651/2015 filed by senators who are opposed to the emergence of Dr. Saraki as the Senate President.
They are: Senators Abu Ibrahim; Kabir Marafa; Ajayi  Boroffice; Olugbenga Ashafa and Suleiman Hunkuni. Defendants to the suit are Saraki, Deputy Senate President, Ike Ekweremadu; the National Assembly, the Clerks of the National Assembly and the Senate.
The plaintiffs seek among other prayers  an order nullifying the Senate Standing Orders 2015 as well as the election of Saraki as the Senate President and that of Ike Ekweremadu as the Deputy Senate President, for being products of the alleged illegal rules.
Justice Gabriel Kolawole had at the last hearing in the case on July 28, adjourned the case to yesterday for the hearing of the plaintiffs’ motion on notice seeking an order restraining Saraki and other defendants from going ahead to constitute the standing committees of the Senate, pending the determination of their suit challenging the validity of the Senate Standing Orders 2015.
Oke contended that court processes in the case were served on his office instead of being served personally on his client, as prescribed by the Federal High Court Rules 2009.
Plaintiffs’ counsel Dele Adesina (SAN) in a counter argument, contended that there are obligatory provisions of the same court rules which envisages and validates service on Saraki through his office.
Adesina also argued that Oke could not be heard since he had yet to file memorandum of appearance to appear for the first defendant (Saraki).
Ruling, Justice Kolawole upheld Adesina’s position and disqualified Oke from appearing for Saraki during the proceedings.
He directed that the case be transferred to another judge, Justice Adeniyi Ademola, who will take over as the vacation judge of the Federal High Court in Abuja onAugust 10.
He adjourned to August 13.
Justice Kolawole had, in a ruling on July 28, dismissed an exparte application by the plaintiffs in which they had earlier sought a restraining order against the constitution of the senate standing committees.
In the ruling, Justice Kolawole said the disputes arising from the alleged forgery of the Senate Standing Orders constituted internal legislative affair of the Senate which the court would not want to intervene in. 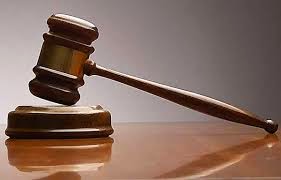