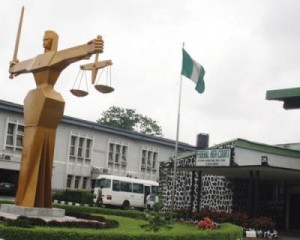 The Federal High Court in Lagos yesterday ordered the forfeiture of $43,449,947 (about N13billion), N23, 218,000 million and £27,800 (about N10.6milion) cash found in Flat 7B, Osborne Towers,  Ikoyi, Lagos.Justice Muslim Hassan ordered that the money be permanently forfeited to the Federal Government following the failure of anyone to claim its ownership.The judge, however, refused to grant the application of EFCC counsel I. A. Mohammed for N5million costs against a lawyer and rights activist, Olukoya Ogungbeje, for wasting the court’s time in relation to the cash.
The Economic and Financial Crimes Commission (EFCC) discovered the money on April 11, 2017 in cabinets and “Ghana-must-go” bags following a tip-off from a whistle-blower.

On April 13, 2017 EFCC counsel, Rotimi Oyedepo, sought an interim order temporarily forfeiting the funds to the Federal Government in line with Section 17 of the Advance Fee Fraud and other Related Offences Act 2006.He said: “Section 17 of the Advance Fee Fraud and other Related Offences Act empowers my lord to order the interim forfeiture of a property to the Federal Government where the property is found to be unclaimed, or where it is found to be proceeds of an unlawful activity.”Section 17 (1) of the Advance Fee Fraud Act says: “Where any property has come into the possession of any officer of the Commission as unclaimed property, or any unclaimed property is found by any officer of the Commission to be in the possession of any other person, body corporate or financial institution, or any property in the possession of any person, body corporate or financial institution is reasonably suspected to be proceeds of some unlawful activity under this Act, the Money Laundering Act of 2004, the Economic and Financial Crimes Commission Act of 2004 or any other law enforceable under the EFCC Act of 2004, the High Court shall upon application made by the commission, its officers, or any other person authorised by it, and upon being reasonably satisfied that such property is an unclaimed property or proceeds of unlawful activity under the Acts stated in this subsection, make an order that the property or the proceeds from the sale of such property be forfeited to the Federal Government of Nigeria.”Justice Hassan directed the EFCC to advertise the order in a national newspaper so that anybody claiming its ownership could claim it within 14 days or it would be permanently forfeited to the government.Although nobody came forward on May 5, when the matter came up, Ogungbeje filed an application for a stay of proceedings pending when a probe panel headed by Acting President Yemi Osinbajo would submit its findings on the cash.

This was opposed by the EFCC, which urged the court to dismiss it and proceed with the forfeiture proceedings.Justice Hassan upheld the agency’s argument and dismissed Ogungbeje’s application for want of merit.The application, the judge said, is totally strange to law, adding that Ogungbeje could not seek a stay of proceedings since he never appealed against the interim forfeiture order.The judge said Ogungbeje, not being a party to the suit, was a meddlesome interloper and a busybody.Ruling, the judge said: “I am in complete agreement with the submission of the learned counsel for the applicant (EFCC) that the property sought to be attached are reasonably suspected to be proceeds of unlawful activity.“By any standard this huge sum of money is not expected to be kept without going through the designated financial institution. Also nobody has shown cause why the money should not be forfeited to the Federal Government.“Having regard to the following I have no option than to grant the application as prayed.“For the avoidance of any doubt, I hereby make the following orders: 1. A final order is made forfeiting the total sum of $43,449,947 found by the Economic and Financial Crimes Commission (EFCC) at Flat 7B of No. 16 Osborne Road, Osborne Towers, Ikoyi, Lagos, which sum is reasonably suspected to be proceeds of unlawful activities to the Federal Government of Nigeria.”The same order was made in respect of the £27,800 and N23,218,000.The National Intelligence Agency (NIA) through its suspended Director-General Ayodele Oke and the Rivers State Government through Governor Nyesom Wike claimed ownership of the funds.But the EFCC had, while arguing the application for final forfeiture order on May 5, named the wife of the Nigerian Intelligence Agency (NIA) Director-General, Mrs. Folashade Oke, as the owner of the flat where the funds were recovered.The EFCC said it found out that Mrs. Oke made a cash payment of $1.658m, in tranches of $700,000, $650,000 and $353,700, for the purchase of the flat between August 25 and September 3, 2015.Source : The Nation