Corruption is mother of all crimes, says EFCC chair Magu 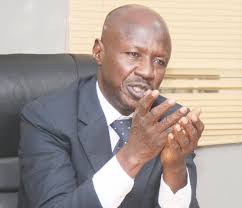 The Chairman of the Economic and Financial Crimes Commission, Mr. Ibrahim Magu, yesterday said corruption is mother of all crimes and must be fought to a standstill.He said the anti-graft war will be premised on the rule of law and protection of the rights of every citizen.He, however, said women are least corrupt than men going by the statistics of suspects on trial by the EFCC.Magu made the submissions, while receiving a delegation of the National Council of Women Societies (NCWS) which was led by its President, Dr. Gloria Laraba Shoda.He said: “If Nigerian women support anti-corruption campaign, the war is half won.”

He said:  “Corruption is an evil; it is a crime against humanity; it is a mother of all crimes. Let everybody support the fight against corruption. No doubt, it is common knowledge that corruption is the major problem undermining the development of our country.“It has also been stated that the nation needs the involvement of all citizens, if the fight against corruption is to be successful. Since I assumed office as Chairman of the EFCC, I have often stated that I do not have a monopoly of knowledge about this fight and that all Nigerians must join me in this important battle to free our country from the grip of corruption.”He restated the commitment of the commission to the rule of law.Magu added: “May I reiterate the fact that our being here today is by the wish of Mr. President and Commander-in-Chief, and the enormous goodwill enjoyed by this commission from all stakeholders. Our activities are largely guided by the laws of the land.“While fighting corruption, we are always mindful of the rights andprivileges of individuals both within and outside the government.To this end, the prosecution of all suspects, high and low, is premised on the rule of law, with modicum and respect for the dignity of man.

“Look, the interest of the people of this country should come first. To us, protecting the interest of Nigeria should be paramount. We should do everything with the fear of God and the interest of Nigeria is more appropriate.”The EFCC chairman commended the National Assembly and the judiciary for supporting the war against corruption.He said: “It is also important to use this medium to further appreciate the moral support being given by the legislative arm as exemplified by the National Assembly.“I equally appreciate the judiciary for the progress in the prosecution of some of our cases. It is gratifying to note that the commission yesterday secured the conviction of some oil subsidy fraudsters who were sentenced to ten years imprisonment. That was the first conviction in the subsidy fraud case.”Responding to a question, Magu said: “Going by statistics of suspects and generally, women are least corrupt. I grew up with my grandmother and I still remember some of the things she used to tell me. Women are people who nurture us; they tell us what is right, what is wrong. They are generally least corrupt.“We believe that women as mothers and wives occupy strategic positions to properly mould their children to be good citizens and also prevent their spouses from engaging in fraudulent activities.“I have taken note of your demand and the need to have a working relationship with the umbrella body of all women organizations in this country, the NCWS.“We will take your suggestions as mothers of the country and see how we can reach all Nigerians and sustain their support for this must-win battle against corruption.“This is what inspired one of my pet projects, the Women Against Corruption Programme (WAC), designed to mobilize womenfolk to become soldiers in the battle against corruption”.The South-West launch of the programme is scheduled to hold in Lagos on February 22, 2017 and we will be counting on your support to make it a success.Earlier in her remarks, Shoda said NCWS concerns border on “ridding our nation of the grips of corruption and restore it back to order.“We are here as concerned mothers. A mother is the manager of the home, a good wife and protector of the home.“We are here to tell you that as mothers, wives and serious stakeholders in the Nigerian project, we want a Nigeria that can guarantee a peaceful home, one that is secure; a Nigeria where we can access good education and health care for ourselves, our children and our husbands.“We want a nation that can boast of good roads across the nation; a Nigeria where our agricultural sector is functional and ranked among the best in the world, not just for the sake of economic diversification policy of the President Muhammadu Buhari administration, but also to ensure that our nation rapidly attains food security.“Mr. Chairman, achieving these basic developmental goals and many more is possible when resources in the public trusts are properly utilized for the purposes for which they were appropriated, and this has continually been the bane of our country.“We believe that in order to stop these wastages and financial indiscipline in the land, this administration has thrown itself fully revamping the nation and removing corruption from our psyche, or at least reducing it to the barest minimum.“We want to assure you, Mr. Chairman, that all women societies in Nigeria, which have assembled under the NCWS, are fully behind the President on this. We pledge the full support of Nigerian women for the good work the EFCC is doing as an institution.“All of us can attest to the consistency of the president in fighting corruption and raising the benchmark in public service. Hence we can see behavioural changes and compliance to the rules of due process. Through several initiatives to back the fight, the EFCC has proven to be an effective institution of government to arrest the tide.“On daily basis, government has continued to block loopholes through many of its policies, among them is the full implementation of the Treasury Single Account (TSA), which has narrowed routes through which our resources were pilfered. We are proud of that.“Someone may want to ask, why are we here? Mr. Chairman, we are here in solidarity with the anti-corruption fight of President Muhammadu Buhari; we are here in support of the EFCC as an institution, we are here to partner with you and many other Nigerians out there, for the restoration of our nation on the path of dignity, on the road to recovery and sustained development of our nation.”Shoda urged the EFCC not to relent in its ongoing war against corruption in order to protect the nation’s future.She added: “Without this fight, the future is bleak, our hope may be lost, our advancement as a people would continue to be arrested and I want to state that our humanity as women, as husbands and as children would diminish.“Before I conclude, Mr. Chairman, we are the women of Nigeria; we are the ones who feel the pains more, we are the ones at the receiving end of all these vices. The Holy Book says, ‘If the foundation be destroyed, what can the righteous do?’“We stand with your institution for the anti-corruption crusade, for you have asked women to collaborate with you, but please, recognize the wisdom and skills of women as good and trusted managers. And accord them recognition at all times!“We want to encourage the EFCC under your supervision to keep up the good work in assisting President Muhammadu Buhari to rebuild Nigeria’s foundation in order to actualize his much-desired dream of bequeathing a nation that is respected in the comity of nations as incorruptible, prosperous and secured.”The Nation