Justice Gabriel Kolawole of the Abuja Division of the Federal High Court, yesterday, allowed the former Head of Service of the Federation, Mr. Stephen Oronsaye, to go home after he entered his plea to a 24-count criminal charge preferred against him by the Economic and Financial Crimes Commission, EFCC
Oronsaye, who was alleged to have used some companies and diverted over N1.9 billion from the national treasury under the guise that the funds were used for biometric data capture project, secured his freedom yesterday despite the fact that the court is yet to hear his formal application for bail.
He was docked and released alongside his alleged accomplice, Mr. Osarenkhoe Afe.
The firm that was allegedly used to perpetuate the fraud between March 2010 and December 2011—Frederick Hamilton and Global Services Limited—was also charged as the 3rd accused person in the matter.
For instance, in count one of the charge marked FHC/CR/297/2015, the EFCC alleged that on or about July 2, 2010, the accused persons collaborated in disguising genuine nature of the sum of N161,472, 000 derived from an illegal act to wit: conducting procurement fraud by means of fraudulent and corrupt action, the contract extension of biometric enrolment purportedly awarded to Innovative Solutions Limited by the Office of the Head of Service of the Federation, without following due process and thereby committed an offence punishable under section 14 (1) (b) of the Money Laundering (Prohibition) Act, 2014.
The anti-graft agency said that it is still tracking a former Deputy Director of Finance in the office of the Head of Service, Mr. Abdulrasheed Maina (now at large) who it said was also involved in the fraud.

Argument for,  against bail
Meantime, immediately the accused persons entered their plea yesterday, EFCC lawyer, Mr. Aliyu Yusuf, applied for their remand in prison custody pending hearing and determination of their bail applications.
Yusuf further urged the court to set a date for the prosecution to commence their trial, stressing that the commission has line up 18 witnesses to testify against the accused.
However, Oronsaye, who was represented in court yesterday by 20 lawyers, including three Senior Advocates of Nigeria, countered EFCC’s application for him to be remanded in prison custody.
His lead counsel, Chief Kanu Agabi, SAN, a former Attorney General of the Federation, argued that the offences contained in the charge against the accused persons were bailable.
Agabi placed reliance on Sections 23 and 158 of the newly enacted Administration of Criminal Justice Act (ACJA), 2015 as well as Section 35(4) of the 1999 constitution, as amended, and argued that the accused persons ought to be deemed innocent until their guilt is established.
Besides, he contended that under Section 162 of the ACJA, the onus was on the prosecution to show cause why his client should not be released on the basis of his oral bail application.
While adopting submissions by Orosanye’s lawyer, counsel to the 2nd and 3rd accused persons, Mr. Oluwole Aladedoye, relied on the decided case law in Abiola vs FRN, and begged the court to grant bail to his client on liberal terms.
In his response, the prosecuting counsel, Yusuf, told the court that the accused persons had earlier served him their written bail applications, insisting that he would need to by way of affidavit evidence, adduce reasons why they should be denied bail.
“My lord we concede that this court has the discretion to grant bail, but that discretion has to be exercised judicially and judiciously based on materials placed before the court,” the EFCC lawyer argued.
At that juncture, counsel to the 2nd accused person, Mr Aladedoye, pleaded that in the event that the court was not favourably disposed to grant the bail request, he urged the court to in the alternative, remand them in EFCC custody.
All the counsel notified the court that they had ab-initio agreed to return tomorrow to exchange arguments on the written bail applications.

Accused released  under undertaking by counsel
Meantime, in a ruling yesterday, Justice Kolawole, who said that he had reflected on the issues canvassed by all the parties, while agreeing with the prosecution that the prison was the appropriate place to remand accused persons after arraignment, said he was mindful to allow Oronsaye and his alleged accomplice to go home on the strength of a written undertaking from their lawyers.
Acknowledging that there are cases that have political undertones, Justice Kolawole said that the court must “remain immune to such issues which are rather complex, which no court of law has the capacity to deal with.”
Pinpointing the fact that the accused persons were earlier granted administrative bail by the anti-graft agency, the judge held: “The prosecution has not told the court that the accused persons posed a flight risk.
“This court will not lend its machinery to soothe the ego of any person or authority.  The first defendant does not in my view pose any flight risk. If the complainant had the powers to admit the accused persons to administrative bail until last Friday when they were detained, this court has the power to make an interim reprieve orders.
“I hereby decline oral applications for bail made by counsel to the accused persons, the application must be formal. The accused persons shall be released on the strength of undertaking from their counsel, which must be made within 48 hours.
“I am comfortable releasing them under undertaking by their counsel. I am not in
doubt that the primary place for remand of an accused person is the prison, but this may not be so in some cases like in this one.”
He maintained that his decision, which may appear radical, was aimed at breaking away from the prevailing practice of judges always remanding accused persons in either EFCC or prison custody. “I am an activist judge,” he jokingly added.
Oronsaye’s lawyer, Agabi, SAN, immediately signed the undertaking and the accused persons were allowed to go home in company of their family and friends.
Meanwhile, whereas the court yesterday fixed July 21 to hear the bail applications of the accused persons, it equally slated October 28, 29, November 3, 5 and December 2 for their trial
(Vanguard) 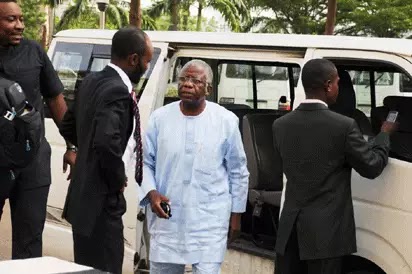