Detained spokesman of the Peoples Democratic Party (PDP), Olisa Metuh got a breather Tuesday at a Federal High Court in Abuja granted him bail at N400million.
Metuh, who was on January 15 remanded in Kuje prison, Abuja after his arraignment, is to remain in prison until he is able to meet the bail conditions.
Justice Okon Abang, in a ruling Tuesday on Metuh’s bail application, also directed him to produce two sureties, who must each signed bond of N200m.
The judge said the sureties must own houses in Maitama, a highbrow area in the Federal Capital Territory (FCT).
Justice Abang said officials of the court must verify the property documents in respects of the property submitted by the sureties.
He directed the prosecuting agency, the Economic and Financial Crimes Commission (EFCC) to confirm the title documents of the property pledged by the sureties and their addresses.
The judge, in granting the bail, noted that the offences for which the applicant was standing trial were bailable.
He said, under the nation’s criminal justice system, an accused is presumed innocent until proven otherwise.
The judge was of the view that the prosecution’s allegation that Metuh tore his statement was not established.
Metuh is charged with breach of public trust, corrupt acquisition of public funds and money laundering.
The commission said, in the charge, that a former Chairman, Board of Trustee (BOT) of the Peoples Democratic Party (PDP), Anthony Anenih benefited from the N400million allegedly received by the party’s spokesman, Olisa Metuh.
EFCC accused Metuh of receiving the N400m from “an unlawful activity” of the immediate past National Security Adviser (NSA), Mohammed Sambo Dasuki.
The commission said its investigation also revealed that Metuh allegedly transferred $2million United. States dollars, through one of his agents, Nneka Nicole Ararume, to Sie Iyenome and Kabiru Ibrahim of Capital Field Investment, an organisation it found not to be a financial institution.
The EFCC was silent on why Metuh gave Anenih N21, 776,000 and for what purpose.
The commission, which was also silent on what investment Metuh made with the $2m, said it will lead evidence to that effect at trial.
Earlier while moving the bail application, Metuh’s lawyer, Chris Uche (SAN) urged the court to admit his client to bail on the ground that the alleged offences were bailable.
He noted that under the Money Laundering Act, where Metuh was charged, the offences which attract a maximum of 7 years are not severe as claimed by the prosecution.
Uche denied the prosecution’s argument that Metuh could interfere with investigation.
He said his client will not evade trial as he is a known personality. He urged the court to grant him on liberal terms or if possible, on self recognition.
Responding, prosecution lawyer, Sylvester Tahir objected to the granting of bail to Metuh.
He argued that aside that Metuh could tamper with the course of justice, having allegedly torn his statement, he was yet to provide sufficient material to move the court to exercise its discretion in his favour.
Tahir urged the court to be guided by the additional conditions contained in Section 162(c) (d) & (f) of the Administration of Criminal Justice Act (ACJA) 2015 before determining the application.
He noted that thesection of the ACJA provides that where an applicant was seen as being capable of tampering with investigation, prosecution’s evidence and the course of justice, he could be denied bail.
He said further investigation was still on and that there was the possibility that further investigation may link the applicant as well as the likelihood of further charges being filed.
On argument that his detention at the EFCC before his arraignment was unlawful, Tahir relied on Section 293 of ACJA 2015 which, he said  empowers the Magistrate to entertain application for remand, to argue that Metuh’s detention before his arraignment was lawful.
Justice Abang has adjourned to January 25 for the commencement of trial.
The Nation 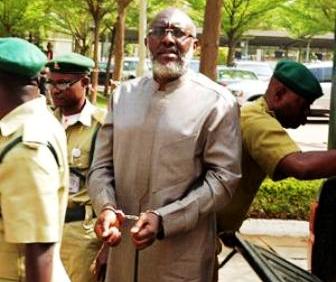