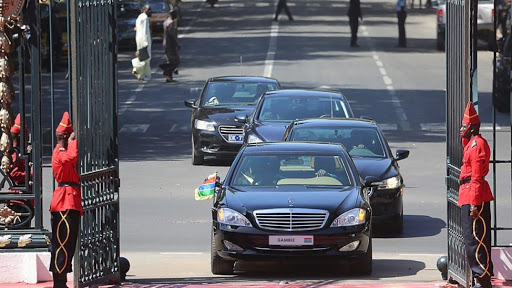 This handout picture taken and released by the Senegalese presidency on January 20, 2017, shows a motorcade with a car bearing the Gambian flag entering the presidential palace in Souar. Regional leaders held 11th-hour talks with Gambia’s Yahya Jammeh to persuade him to hand over power peacefully on January 20, as troops from five African nations stood by ready to intervene failing a negotiated deal. Jammeh has rejected President Adama Barrow’s December 1 election win, despite significant pressure from regional powers and the UN, sparking a major crisis and sending Gambians and tourists — vital for the tiny country’s economy — fleeing. Handout / SENEGALESE PRESIDENCY / AFP

Defeated President of The Gambia, Yahya Jammeh has finally relinquished power after much pressure from the combined forces of the Economic Community of West African States, (ECOWAS) and the African Union (AU).

In a nationwide broadcast to the Gambian people, yesterday, the former leader said he decided to relinquish power to avoid bloodshed in the country and wished the country well as it turns a new political corner.

Meanwhile, the newly sworn-in president, Adama Barrow, said yesterday, that he was returning to his country following Jammeh’s announcement to step down as president.

Barrow on his twitter handle, @adama_barrow, said, “As Yahya Jammeh officially stepped down from office, I will be returning to my homeland, the Republic of The Gambia.
Barrow also told the Associated Press in an interview on Saturday that he would enter Gambia once a security sweep had been completed. The new president promised to set up Truth and Reconciliation Commission to investigate allegations of human rights abuse under the former president.

Jammeh, who ruled the country with an iron fist for 22 years, said his decision to quit was not dictated by anything else, but by the “supreme interest of the Gambian people and our dear country.”

He lost the December 1, 2016 election to rival Barrow. He initially accepted the result and congratulated Mr. Barrow, but later recanted saying he would not step down.

But the international community spearheaded by regional organisations such as ECOWAS and AU, with the backing of the United Nations Security Council insisted that he must step down for the eventual winner.

The former president said he believed in the importance of dialogue and was particularly pleased that the political impasse that gripped the country since December 2016 did not lead to any loss of life.

“Taking into consideration, my prayer and desire that peace and security continue to reign in the Gambia. At a time when we are witnessing trouble and wars in other parts of Africa and the world, the peace and security of the Gambia is our collective heritage, which we must jealously guard and defend.”

The disgraced leader said he was proud and honoured to have served his country, and thanked all Gambians, members of the armed and security services, who have supported him

“I am indeed thankful to Allah that up till now, not a single casualty has been registered. I believe in the importance of dialogue and in the capacity of Africans to resolve among themselves all the challenges in the way towards democracy, economic and social development.

“It is as a result of this that I have decided to, in good conscience, relinquish the mantle of leadership of this great nation with infinite gratitude to all Gambians – women, children, youth and men – and friends of the Gambia who have supported me for 22 years in the building of a modern Gambia.”

Above all, the independence of the free and proud people of the Gambia, and I will always, together with you, defend this independence that we so dearly fought for and worked for.”

The former President, however, did not indicate what he planned to do going forward and whether he would continue to play any role in the politics of the tiny West African nation.