The Supreme Court has upheld the elections of Governors Abiola Ajimobi (Oyo), Ifeanyi Okowa (Delta) and Ibrahim Geidam (Yobe).
The apex court in separate decisions dismissed all the appeals challenging the elections.
The court promised to provide reasons for its decisions on February 15.
Justice Mary Peter-Odili, who delivered the lead judgment in Yobe’s case said: “I have reviewed the records in this appeal and the briefs filed by the parties. I find no merit in the appeal and I hereby dismiss it.

She did not award cost but ordered the parties to bear the costs.
Other members of the seven-man panel agreed with her lead judgment.
Justice Clara Bata Ogunbiyi read the lead judgment in the case of Oyo.
She said: “I have read all the processes filed in this appeal. I have also considered all the arguments by parties. I dismissed the appeal.”
Justice Ogunbiyi also dismissed as an abuse of court process, an appeal filed by Rasheed Ladoja of the Accord Party.
She awarded no cost, but said she will provide reasons for her decision on February 15.
Justice Musa Dattijo Muhammed read the lead judgment in one of the appeals on Delta governorship election also dismissed the appeal
He said: ?”I have carefully considered the records of appeal in this case. I have also considered the arguments by counsel and thier briefs, I find no merit in the appeals.
He ordered the parties to bear thier cost and promised to give the reasons for the judgment on February 15.
There were two appeals from Delta State. One by Great Ogboru of Labour Party. That appeal was dimissed by Justice Musa Dattijo Muhammed.
The second appeal which was filed by the All Progressives Congress?’ candidate, Olorogun Otega Emehor was dismissed by Justice John Okoro.
Justice Okoro said he found ?no merit in the appeal and promised to give reasons for the judgment on February 15.
Okowa yesterday called on the All Progressive Congress (APC) candidate and his counterpart in Labour Party (LP), Olorogun O’Tega Emerhor and Chief Great Ogboru to apologise to Deltans for distracting them with legal battles they knew were not justifiable.
Okowa spoke yesterday in Asaba at a thanksgiving service held shortly after the Supreme Court upheld his election.
He said Emerhor and Ogboru knew they did not win in the election, yet, they went to the Elections Petition Tribunal, to the Court of Appeal and then to the Supreme Court, subjecting Deltans and lovers of the state to uncertainties.
“It is time to forgive and move on, I also believe that my opponents should apologise to all Deltans because, they knew the people’s choice but they just wanted to go through this legal process.” He added: “I have forgiven them but I think they need to apologise to Deltans because they distracted the people.”
In a sermon, the Chaplain, Government House Chapel, Ven. Charles Osemenam said: “We are celebrating the unity among us, we are celebrating love among Deltans, God never fails and with God, all things are possible, God is doing great things in our state.
The Oyo State governor yesterday expressed gratitude to the people for their support during and after the 2015 election.
In a statement by his Special Adviser on Communication and Strategy Mr Yomi Layinka, yesterday, Ajimobi said the Supreme Court judgment handed down freedom to the people of the state and paved the way for consolidation in his good works.
“At last the Supreme Court has graciously freed the people of Oyo State from the painful distractions mounted on their path by Senator Rashidi Ladoja and his Accord Party in the past many months.
“Three times the victory of Senator Abiola Ajimobi at the 2015 governorship election was challenged, three times he has been resoundingly declared winner. Although all men and women of  goodwill pleaded with the Ladoja camp to accept defeat and cooperate with the winner in the onerous task of rebuilding the legacies of our heroes past, they bluntly refused.
“Although other contestants from other parties quickly conceded defeat and indeed proceeded to congratulate the winner, Senator Ladoja and his party refused to play the gallant losers, preferring instead to fight to the finish.
“But we were never for once bothered knowing full well that the people had spoken so clearly and unmistakably on that historic April day by returning a vote of confidence in the candidate in whom they were well pleased.
“Now that their fight is exhausted and their wind vanes broken, we hope a senator Rashidi Ladoja and his band will henceforth turn their energies to better and more productive ends in the interest of our dear state and its development.”
“ The APC in Oyo State in a statement by its Director of Publicity and Strategy, Olawale Sadare, noted that former Governor Ladoja had thrown away the remnant of respect which he commanded as a supposed statesman by deliberately wasting the time and resources of the good people of the state when he used needless litigation to slow down the pace of governance since April 2015 when he contested and lost the election.
“Now that the highest court in the land has ruled that Ladoja did not win any election as he was wont to make some people believe, he should be ready to move on with life and try hard to convince the world on why he must not be made today for his numerous corruption cases. Undoubtedly, Ladoja’s desperation to return power as the governor of Oyo State was informed by his plan to cover up his record as the one who inflicted the pain of financial backwardness on the Pacesetter state when, as governor between 2003-2007, he supervised the looting of the treasury.
“Recently, it was also revealed that he (Ladoja) was involved in the Dasukigate by owning up to the collection of a whooping N100m from Chief Tony Anenih being part of the $2.1b meant for the purchase of arms by the immediate past administration of Dr. Goodluck Jonathan. But for this singular act, the insurrection of the Boko Haram would not have thrived to the extent of claiming several thousands of innocent lives and properties estimated as trillions of Naira if funds meant for equipping the military and security agencies were not diverted for the benefit of few corrupt individuals within and outside the Peoples Democratic Party including a former governor of Oyo State, Senator Rashidi Adewolu Ladoja.
The Nation 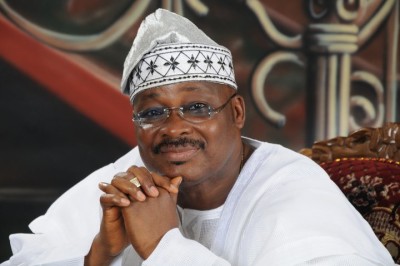