SSS arrests over 20 kidnappers across Nigeria

The State Security Service, SSS, in a combination of special tactical operations and robust actionable intelligence has arrested over 20 kidnap kingpins across the country.
The operations sanctioned by the Director-General, Lawal Daura, succeeded in the arrest of the masterminds and other facilitators of these kidnapping syndicates

These groups terrorise their victims and members of the public across the States particularly in the South-South, South-West and the North-West zones of the country. In the course of their dastardly acts, these criminals rape, maim and even murder their victims. They inflict psychological pains, humiliation and grief on such victims and their families. They extort huge sums of money from families or friends of victims.

To checkmate this ugly trend, the source added, the SSS in line with its statutory mandate, initiated series of special tactical operations in the States prone to the nefarious activities of these criminal gangs.

In a statement signed by Tony Opuiyo of the secret service said that the latest onslaught is coming against the backdrop of upsurge in kidnapping incidents perpetrated by criminal syndicates/elements in the past few weeks.

Among those in custody is one Victor Afikparobo, who was arrested on July 20, 2015, at Owheologbo, Isoko North Local Government Area(LGA) of Delta State.
He said that the capture of Afikparobo, who is a key member of the “FEDERA” gang, a kidnap syndicate which perpetrated series of kidnap incidents within the Ikorodu/Otta axis of Lagos State, helped to give further leads on their leader and other gang members.

On July 22, 2015, the source added, at Ovara  Orugun village in Ughelli North LGA of Delta State, one John Felix aka Austin, Rowson Anufa aka Amori and Obukoko Emoabe, a local herbalist and supposed talisman to the group, were also arrested by this Service. He said that the trio are key members of the kidnap gang that has been terrorising the Lagos-Ikorodu road, and Owo, Ondo States.

The source further disclosed that on July 20, 2015, at Uduere Village in Ughelli North LGA, Delta State, one Joseph Ojobor aka Chairman who is said to be the leader of the Lagos cell of the “Federa” kidnap syndicate, was also arrested. He had also been linked to some incidents of illegal oil bunkering and pipeline vandalism.

On July 24, he said, the team arrested another member of the Lagos cell of the “Federa” kidnap syndicate, one Timothy Japhet in his house at Onokpasa Avenue in Okhan village in Ughelli North LGA, Delta State.

The source further disclosed that on July 19, another member of the notorious gang, one Howell Anufa, was apprehended by the men of the State Security Service (SSS).
The suspect, the source noted, was instrumental to the kidnap of the Regent of Akungba in Ondo State. Anufa was also said to have participated in the spate of kidnap incidents, carried out by the gang in Lagos and Ogun States respectively, before he relocated to Warri, Delta State, where he was eventually arrested.

In the same vein, the Service arrested one member of the Ekiti kidnap syndicate name, Ayodeji Oluwafemi, and as well as one Rachael Oladapo, a female, who was used by the gang as a reconnaissance spy and informant, was equally apprehended. Also, in a follow-up tactical raid in the State, DSSS claimed that five other members of the notorious Ekiti kidnap gang were intercepted by operatives of the DSS including Felix Omaiwa, Bose Ajayi, Tope Gabriel, Olayemi Ogunmola and Damilola Obamayegun.

In a similar enforcement action, the men of the SSS spread their tentacles to the Abia and Imo States axis, where one Henry Chibueze aka Vampire, who is said to be the leader of an infamous kidnap gang that operates around the South-South and South-East axis, was arrested on July15, 2015.
The source continued: ” Subject is a ruthless criminal who derives joy in shooting his victims on the leg whenever there is delay in the payment of ransom.  Chibueze was arrested at his hideout in Ohafia, Abia State, where he was being treated for an injury he sustained when he escaped during an earlier operation in Owerri, Imo State. Similarly, one Akeem Bello, a lance-corporal who deserted his unit in the Nigerian Army, while deployed in Maiduguri, to join vampire’s kidnap gang, was also apprehended by the Service.

“On July 19-20, 2015, at various locations in Danko-Wasagu LGA of Kebbi State, the Service apprehended four suspected kidnappers of one Maryam Mohammed Rabiu, the daughter of Mohammed Rabiu, who was abducted on July 13, 2015. The gang has been identified as the syndicate which perpetrated the recent kidnap of Abbas Mohammed Jega, the driver of the brother of former Chairman of INEC, Prof. Attahiru Jega. The gang in its bid to evade detection used one of the three mobile phones stolen earlier from Maryam Rabiu, to establish contact with the family, in which they demanded a ransom of N20m”.

“On July 24, 2015, at Mailaka village of Danko-Wasagu LGA, the Service also arrested three key members of another kidnap syndicate operating across Sokoto, Zamfara, Kebbi, Niger, FCT, Kwara and Oyo States. These elements are Umar Gide (Dudu), Ibrahim Mugu and Baban Garna. Dudu was found to be involved in the kidnap of the daughter of former Council Chairman of  Danko-Wasaju LGA and the mother of the Post-Master General of the Federation, among several others. Another member of the gang, Mohammed Sani aka Sani Majawas arrested by the Service in Zamfara State”.

Having declared total war on the syndicates, the DSS operations are said to be ongoing to apprehend fleeing members of some of the identified kidnap gangs and others hibernating at various areas across States of the Federation.

He also noted that while the judicial processes are being perfected to arraign the arrested suspects before the courts in line with relevant laws, the Service assured “the good and responsible citizens of this great country, that it would not relent in its efforts to checkmate the activities of any criminal gang that terrorizes innocent citizens across the Federation thereby creating a climate of insecurity”.

As the Service moves to fulfil this mandate, the source added, members of the public are urged to freely volunteer any useful information that would assist in dealing with such criminal gangs. He assured that such information will be treated.
-Premium Times 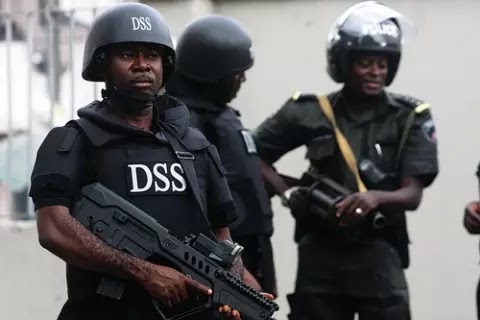