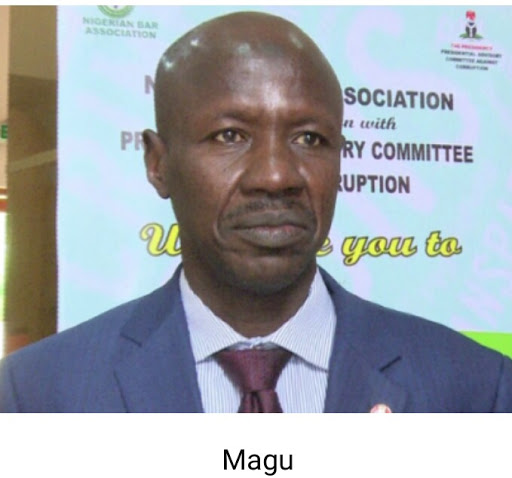 Citing a Department of State Services (DSS) report, the Senate has for the second time in three months rejected Ibrahim Magu’s nomination as Economic and Financial Crimes Commission (EFCC) chairman. It did not consider Magu’s antecedents as anti-graft czar in arriving at its decision. It has asked President Muhammadu Buhari to nominate another person for the job. Will he do that? What are his options under the law? ADEBISI ONANUGA sought lawyers’views.Will Ibrahim Magu eventually become Economic and Financial Crimes Commission (EFCC) chairman? This is a hard nut to crack, considering that he has been rejected twice by the Senate in three months. Last Wednesday, the Senate again turned down President Muhammadu Buhari’s request to confirm him, citing a Department of State Services (DSS) report.Last December 15, it rejected Magu because of the DSS report. In rejecting him again last Wednesday, it said, among others, that the President’s communication on the matter failed to address issues raised in the DSS report.Some Senators also expressed disappointment at Magu’s performance during the screening session. They said he failed to properly respond to some questions.However, there are insinuations that the Senate’s refusal to confirm Magu was partly influenced by the EFCC’s refusal to drop some high-profile probe.

Magu’s growing reputation Incidentally, barely a few days after Senate’s rejection, Magu was invited by two leading anti-corruption organisations, the Transparency International (TI) and Global Witness, to speak at a conference on money laundering and assets recovery, holding today (March 21) in London. Magu is expected to deliver a paper on the topic: “Give us our money back – Nigeria’s fight against corruption: A critical conversation”.The invitations, no doubt, were in recognition of the invaluable role the EFCC has been playing in the recovery of stolen funds in Magu’s more than a year in office.Under Magu, the commission has recovered billions in foreign and local currencies from corrupt politicians and public officers.A former Chief Security Adviser, Col. Sambo Dasuki, is in court on charges of corruption. Three former Chiefs of Air Staff -Alex Badeh, Dikko Umar and Adesola Amosu – and former Petroleum Minister Mrs Diezani Alison-Madueke, among others, are also facing charges of corruption involving huge sums of money.