Security tight at Kenya court ahead of hearing on election challenges 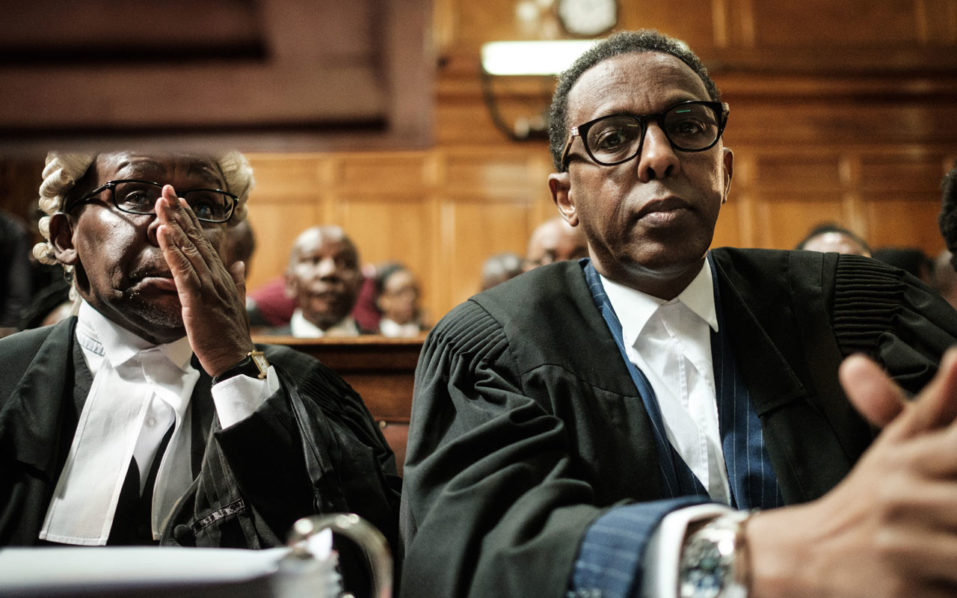 President Uhuru Kenyatta’s lawyer Ahmednasir Abdullahi (R) sits with Githu Muigai, the Attorney General of the Republic of Kenya (L), before the hearing seeking to nullify the October 26 repeat presidential election on grounds that the IEBC did not conduct fresh nominations for candidates before gazetting the names and proceeding with the poll, on November 14, 2017 at the Nairobi supreme court of justice. Kenya’s Supreme Court received two petitions November 6, 2017 to overturn the result of last month’s presidential election, which was already a re-run poll ordered by the court after it annulled an earlier vote in August. Kenyan President Uhuru Kenyatta won the election with 98 percent. However, only 38.8 percent of registered voters turned out to vote, on a day marked by violent protests and chaos at polling stations in opposition strongholds. / AFP PHOTO / YASUYOSHI CHIBA

Security was tight outside Kenyan Supreme Court on Tuesday as it prepared to review petitions challenging President Uhuru Kenyatta’s victory in the October presidential election.The court, which has been centre stage for Kenyan politics since it nullified the results of August’s presidential election.That decision led to the re-run election on Oct. 26.The court has not convened since the day before the October election, when it had been due to deliberate on a last-minute request to delay the vote.But that hearing was canceled because not enough judges showed up to make a quorum.A source said the had demanded more security after the bodyguard of the deputy chief justice was shot the day before the hearing and said they would refuse to attend hearings without it.The source said government turned them down.The chief justice later denied the Reuters report on the security issue and said the police had “enhanced” the judges’ security.All six judges showed up for Tuesday’s meeting.They are expected to announce when proceedings will begin and whether it will hear all three petitions filed, one by a former lawmaker and the other two by civil society organisations.Kenyatta came to power in 2013 and won a second and final term in August, defeating opposition leader Raila Odinga by 1.4 million votes.Odinga did not contest the repeat vote on Oct. 26, saying it would be unfair because the election commission had failed to implement reforms.Kenyatta won with 98 per cent of the vote, though opposition supporters staged a boycott and prevented polls from opening in the west of the country.Kenya is a regional hub for trade, diplomacy and security and its prolonged election season has disrupted its economy.Human rights groups say at least 66 people have died in bloodshed surrounding the two elections.The Supreme Court was created by a 2010 constitution that followed a violent political crisis three years earlier.No fewer than 1,200 people were killed in ethnic clashes after the disputed election in 2007
.