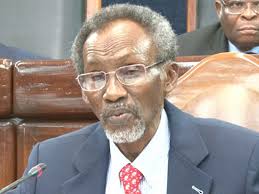 The refusal of the National Judicial Council (NJC) to order the suspension from office of the seven judges, currently under investigation by the Department of State Service (DSS), has reportedly rattled the Presidency, a source said last night.

Meanwhile, the Chief Justice of Nigeria (CJN), Justice Mahmoud Mohammed, yesterday, insisted the judges would not be suspended, especially as there was no formal complaint to that effect from the DSS to the NJC.

Mohammed spoke in a press statement. The statement was a follow up to the advertorial published in some newspapers, yesterday, by the NJC defending its position not to suspend the embattled  judges.

The advertorial was responding to the statement by the Nigerian Bar Association (NBA) that the judges should be suspended. The judges, whose homes were raided and arrested by operatives of the DSS during separate operations carried out on October 7 and 8, include two Justices of the Supreme Court, Sylvester Ngwuta and Iyang Okoro. Other judges are Adeniyi Ademola of the Federal High Court Abuja, Kabir Auta of the Kano High Court, Muazu Pindiga of Gombe High Court, Mohammed Tsamiya of the Court of Appeal, Ilorin, and the Chief Judge of Enugu State, I. A. Umezulike.

According to a Presidency official, the action of the NJC, under the chairmanship of the CJN, amounted to a volt face. One of the prominent officials in the Buhari administration told Sunday Vanguard that the Presidency was shocked by what the CJN did shortly after visiting the Villa and expressing what appeared to be a disposition to suspend the affected judges from office pending the conclusion of their matters in court.

“Obviously, it seems to us that the man has been ‘captured’, the Presidency official said, referring to the leadership of the NJC but did not explain what he meant by being captured. “But the truth remains that this administration is not going to condone any form of graft and will not be deterred by the antics of the NJC since it is not a court with powers to try criminal matters.

The official explained that the CJN, who heads the NJC, early last week, visited the Villa and may appear to have settled to an understanding that it was necessary to ask the affected judges to step aside from their duty posts until further notice only for him to do the opposite.

The face-off between the two tiers of government has widened the gulf between them, raising questions as to who will eventually try the seven judges to be arraigned for alleged corruption this week. The National Prosecution Council and the Office of the Director of Public Prosecution, according to Sunday Vanguard sources, have been mandated to handle the trial of the affected judges in batches, while the DSS may serve as a key witness against them. CJN defiant In his statement, yesterday, CJN Mohammed said he was yet to get a formal complaint from the DSS, regarding the seven judges.

He maintained that the misunderstanding was between the NJC, which was established by the Constitution, and the DSS which, he said, belongs to the Presidency. The statement, signed by Senior Special Assistant to the CJN, H. S. Sa’eed, read: “Under the powers provided by the 1999 Constitution of the Federal Republic of Nigeria(as amended) and as the Head of the Third Arm of Government, the Honourable,   the   Chief   Justice   of  Nigeria   and   Chairman   National   Judicial Council, Honourable Justice  Mahmud  Mohammed,  GCON is calling on all Nigerians   to   continue   to   have   faith   and   full   confidence   in   the   Nigerian Judiciary. “The   Honourable   Chief   Justice   of   Nigeria   (Hon.   CJN)   is   indeed   deeply concerned   by   the   rising   antagonism   over   the   recent   arrest   of   our   Judicial Officers and other issues pertaining thereto. “Furthermore, it must be reiterated that the current misunderstanding is only between the National Judicial Council (NJC), which was established by the Constitution and the Directorate of the State Security (DSS), in the Presidency. “Hence, we  must  emphasise that   the  Judiciary continues  to  maintain cordial relations  with the other arms of government, that is,  the Executive  and the National Assembly. “The   Hon.   CJN   reiterates   that   the   Nigerian   Judiciary,   as   an   Arm   of   the Government of the Federal Republic of Nigeria, is not a party in this matter, nor is the Nigerian Judiciary on trial. “On the call by President of the Nigerian Bar, A. B. Mahmoud, SAN, to suspend Judicial Officers whose residences were invaded and who were subsequently arrested and detained by the DSS, we believe that the call was unnecessary and hasty as the said   Judicial   Officers are   still being   investigated   by the DSS. “Furthermore,   the   DSS   is   yet   to   forward   any   complaint   or   any   official communication regarding the seven Judicial Officers to the National Judicial Council. “Indeed, some of the affected Judicial Officers have already been investigated by the NJC, which found some culpable and recommended their removal from office by dismissal or retirement to the President and respective Governors as provided under the Constitution. “While some are still being investigated by the NJC, in respect of others, no complaint against them has been received by the NJC   whose   powers   to   suspend   must   be   exercised   in   accordance   with   the provisions of the Constitution establishing it. “The National Judicial Council is currently investigating the various complaints made against a number of Judicial Officers. As soon as such investigations are completed,   appropriate   recommendations   will   be   made   to   the   President   or Governors, as the case may be, who will have the final say on the fate of the affected Judicial Officers who could then be charged for the offences disclosed from the facts against them and be prosecuted if necessary. “The Hon. Chief Justice of Nigeria also wishes to state in clear terms that the ‘sting’ operations carried out by the DSS   on 07 and 08 October 2016 was certainly an assault on the independence of the Nigerian Judiciary. “Nonetheless, the Judiciary fully supports the anti-corruption drive of the President of the Federal   Republic   of   Nigeria,   President   Muhammadu   Buhari,   GCFR. “The Nigerian Judiciary has never and will never shield any Judicial Officer who is found to be guilty of corruption, however, the Hon.   CJN   believes that due process and the rule of law must be followed. “As a testament to our commitment to uphold the Constitution, the Nigerian Judiciary continues to function and our Courts remain open to all who seek remedy. “With the support and good will of all Nigerians, the Nigerian Judiciary will continue to serve with all its heart and might”. Body of SANs backs NBA Separately, yesterday, the Body of Senior Advocates of Nigeria threw its weight behind the call by the NBA on the arrested judges to proceed on leave of absence pending when they are given a clean bill of health. The Body, which met in Lagos, endorsed every action taken by the NBA President, Mr Abubakar Mahmoud (SAN), so far on the judges.

The meeting was attended by the Attorney General of the Federation and Minister of Justice. On Amaechi, Onu, Presidency keeps mum In a related development, the Presidency is keeping sealed lips on the allegations against the Minister of Transportation, Mr. Chibuike Amaechi, and his colleague in the Ministry of Science and Technology, Dr. Ogbonnaya Onu, both of whom some of the embattled judges  accused of using the DSS against them for refusing to oblige their request to influence matters bordering on the 2015 elections. But a top official who spoke anonymously told Sunday Vanguard: “The hands of these people (judges) have been found in the case. Large sums of money were found in their houses. How can you compare them to the ministers against whom mere allegations were made? You don’t compare apples with oranges”.First published on Vanguard