PDP CRISIS: Makarfi, Sheriff issue jail threats against each other 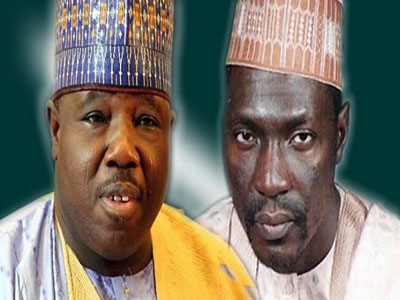 Peoples  Democratic Party (PDP) leaders were still tearing at one another yeNation rday.
The two factions of the leading opposition party threatened  imprisonment against each other for laying claims to the leadership of the troubled former ruling party.
The Ahmed Makarfi-led Caretaker Committee said it would send Alhaji Ali Modu Sheriff to prison for parading himself as the party’s National Chairman.

The Sheriff faction replied that it had enough evidence to sue the Makarfi faction’s members for alleged contempt of court.
The party’s crisis resurged after its loss at last weekend’s Ondo State governorship election.
Caretaker Committee spokesman Dayo Adeyeye yesterday described Sheriff as a discredited individual who would soon be expelled from the party.
Adeyeye accused the Sheriff camp of trying to sustain what he called its illegal claim to the party’s leadership, thereby misleading unsuspecting members and members of the public as well.
According to him, the caretaker committee has been confirmed to be the authentic leadership of the party by various courts, pending the conduct of a national convention.
Adeyeye said the committee would have ignored the “empty rantings” of Sheriff and his camp, but that it would not serve the interest of democracy to ignore them.
The statement said: “First and foremost, we wish to state categorically that in consonance with judgments of various courts, which Ali Modu-Sheriff and his team of confused travellers have not bothered to appeal, the former Borno State Governor is not the chairman of our party, the PDP.
“His consistent claim to the office is a continuation of their plans to sustain mayhem in our party, but nature and fair justice have taken care of his desperation.
“We wish to draw the attention of all Nigerians to the judgment delivered by Justice Valentine Ashi of the FCT High Court in Apo, Abuja on June 29, 2016, which states clearly that Senator Ali Modu-Sheriff was never and is not the PDP National Chairman.
“This judgment was upheld by the ruling of Justice Nwamaka Ogbonnaya, also of the FCT High Court in Kubwa, Abuja on August 17, 2016.
“It is instructive to note that Senator Modu-Sheriff and his team of circus performers have not deemed it fit to appeal these court judgments. It is trite in law that a judgment not appealed is binding on the defendant.
“The courts have spoken, and their pronouncements are binding. However, those who wish to spend the rest of their lives behind prison bars may continue to utter heresy against the court. We hope their children would be proud to bear the family names of convicts.”
The Makarfi camp accused Sheriff and his group of impunity, lawlessness and greed, adding that “honour cannot be expected from impostors”.
It called on the Sheriff camp to disband, saying that the rain of vengeance would not hang in the clouds forever.
But the Sheriff camp said the Makarfi camp should be committed to prison.
Its Deputy National Chairman Dr. Cairo Ojougboh, in a statement yesterday, said members of the Makarfi camp have been evading arrest.
The statement said: “It is the caretaker committee that is actually playing with jail term because there is a form 48 and 49 already issued against them from the Federal High Court that is waiting for them. The effort to serve and arrest them was aborted because they evaded the law.
“Adeyeye is shining the shoes of Governor Ayo Fayose so he could be awarded the Ekiti State gubernatorial ticket. Let him kiss Fayose’s backside till kingdom come, Fayose will not play ball. The party will do what needs to be done about Adeyeye, according to our party’s constitution at the appropriate time.”
In Akure, the Markafi faction suspended the factional state chairman, Mr. Biyi Poroye, and 21 others.
Poroye, who is of the Sheriff faction, instituted the suit on whose grounds the court restrained Eyitayo Jegede, following which the Independent National Electoral Commission (INEC) temporarily suspended Jegede’s candidacy and endorsed Jimoh Ibrahim.
Jegede’s name returned to the ballot two days to the election after the Court of Appeal upturned thhe high court ruling.
The faction also suspended Mr. Ebenezer Alabi, Ibrahim’s running mate.
The statement by the State Publicity Secretary of the Makarfi faction, Banji Okunomo, after the party’s  State Working Committee (SWC) meeting, however, did not include Ibrahim on the list of those suspended. The group has always insited that Ibrahim is not a member of the PDP.
The embattled party members were suspended for alleged anti-party activity in the governorship election.
Others suspended are: Dennis Alonge, Johnson Alabi, Dr. Olu Ogunye, Senator Meroyi, Mrs. Yemi Ajonibode, Musa Megida, Isaac Alase, Sola Ebiseni, Ademola Genty, Prof. Yemisi Akinyemiju and Dare Emiola.
Also suspended are: Yemisi Akinmade, Ade Adebawore, Bakkitta Bello, Adegboruwa Taiwo, Omowole Oluwagbehinmi, Gbamila Ogunji, Abiye Ademoyegun, and Dara Akinbo.
The party said its decision was in line with Section 57 of its constitution and the inherent task conferred on its State Working Committee.
The statement said: “By the virtue of the Court of Appeal judgment, Biyi Poroye did not only cease to be an executive as he claimed, but they have also turned out to be ordinary members of the party.”
Okunomo said the suspended members were expected to appear before the disciplinary committee on December 5.