Our witnesses are afraid to testify against Nyako, son; EFCC tells court

The Economic and Financial Crimes Commission, EFCC, has told the Federal High Court sitting in Abuja that two key witnesses it lined up to testify against the former governor of Adamawa State, Admiral Murtala Nyako, rtd, who is facing money laundering charge, have died under mysterious circumstances.
‎The EFCC, via a counter-affidavit that was deposed to by one of its lead Detectives, Mr. Adekunle Christopher Odofin, ‎said that the witnesses, Ma’aji Mohammed Iro and Abdulmalik Dalhatu were found dead shortly after they came to its office and ‎testified against the accused former governor.
Late Iro was the then Regional Manager of Zenith Bank Plc, North East, Nigeria‎, and was in charge of the accounts of Adamawa State with the bank.
He was said to have adduced incriminating evidence against Nyako who is answering to a 37-count criminal charge alongside his son, Abdulaziz, a serving Senator.
They are facing trial alongside their alleged accomplices- Zulkifikk Abba and Abubakar Aliyu.
Five companies that allegedly served as conduit pipes for the illegal diversion of the funds-Blue Opal Limited, Sebore Farms & Extension Limited, Pagoda Fortunes Limited, Tower Assets Management Limited and Crust Energy Limited, were equally charged as the 5th to 9th accused persons.
Trial Justice Evoh Chukwu had on Friday granted the accused persons bail to the tune of N350million each.
They were asked to produce two persons to stand as their sureties or in the alternative, provide one surety who must be a serving Director in any federal government establishment.
The surety according to the court must show a proof of ownership of landed property in Abuja, depose to an affidavit of means before the Deputy Chief Registrar of the High Court, as well as, show evidence of three years tax payment.
Besides, the accused persons were directed to surrender their international passport to the court alongside their two recent passport photographs, even as the court slated ‎September 30 to commence their trial.
However, EFCC is kicking against their release on bail, decrying that, “two of our crucial witnesses, Ma’aji Mohammed Iro and Abdulmalik Dalhatu have died in mysterious circumstances and this has instilled fear in other prospective witnesses in this case”.
‎The anti-graft agency expressed its fear that Nyako and his son would go into hiding.
‎It told the court that: “Securing the arrest of the 1st and 2nd accused persons was very difficult as they became fugitives upon becoming aware of the ongoing investigation against them by the commission.
“That the commission obtained a warrant of arrest dated January 28, 2015, against the 1st and 2nd accused persons. The said warrant of arrest is marked as Exhibit RJ1.
“That the commission had to declare the 1st and 2nd accused persons wanted in the National Dailies and other media before they could be found after several months”.
Narrating what ‎led to the arrest and trial of the ex-governor, EFCC, through Odofin who was a member of the team assigned to investigate the allegation against the accused persons, averred:
“That following a petition received by the commission in October 2011 alleging gross abuse of office against the 1st accused and other ‎criminal misappropriation of moneys running into tens of billions of Naira of the funds of Adamawa State Government.
“The commission swung into action and carried out discreet investigation into the said allegations.
“That the investigations carried out by my ream revealed the following: a) That the 1st and 2nd accused are the owners of the 6th accused Sebore Farms & Extension Limited, which they operate by themselves.
“That several fictitious contracts running into billions of Naira were awarded to the said 6th accused while the 1st accused was governor of Adamawa State.
“That on the instruction of the 1st accused Ma’aji Mohammed Iro made several cash lodgements running into billions of Naira into the accounts of several companies and individuals including the accounts of the 6th and 9th (Crust Energy Limited)‎ accused persons, all from the accounts of Adamawa State Government for no specific reason.
It told the court that the 3rd accused, Zulkifikk Abba, who was a political adviser to Nyako, is the owner of Alpharetta Farms Limited, “one of the companies ‎through which several billions of Naira belonging to Adamawa State was stolen”.
It said that the 4th accused, Abubakar Aliyu, was a signatory to several accounts of one of the indicted companies, ‎Blue Opal Limited, “through which several monies running into billions of Naira from the funds of Adamawa State Government were laundered to develop Hill View Estate, Abuja”.
In the charge before the court, the accused persons were alleged to have in their bid to conceal the illicit origin of the funds they siphoned from the coffers of the state, embarked on the development of Estates in Abuja.
EFCC said it was able to trace various cash lodgements that Nyako and his son made into various bank accounts they operated in the name of the companies that were fingered in the fraud.
They were said to have sequentially withdrawn the funds through the late bank manager and channelled same for private use, contrary to section 15 (2) (a) & (6) of the Money Laundering (Prohibition) (Amendment) Act, 2012 and punishable under section 15 (3) of the same Act.
It would be recalled that Nyako who hitherto went into self-exile, returned to the country following the inauguration of President Muhammadu Buhari on May 29
(Vanguard) 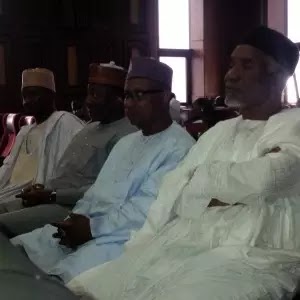