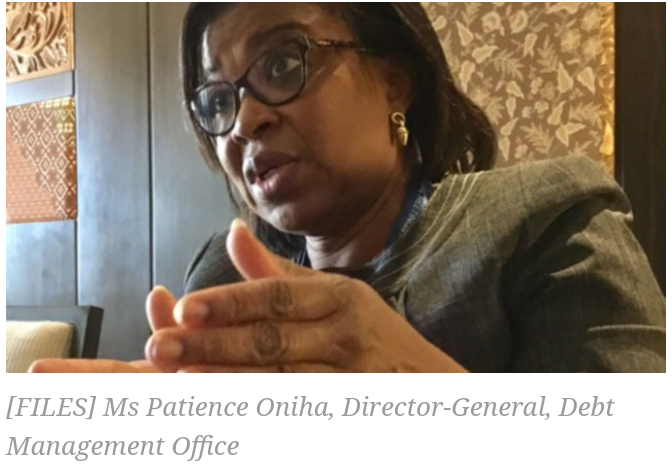 From the N12.118trillion level of indebtedness at takeover by June 2015, the current administration of President Muhammadu Buhari has grown Nigeria’s public debt to a new height of N26.215trillion as at the end September last year, the country’s debt agency, the Debt Management Office (DMO) announced yesterday.

The new level represents a growth of over N14trillion of additional borrowings by the Federal and State Governments in the country within the span of five years of the current administration in Nigeria. The new debt stock represents the country’s almost thee years fiscal spending, going by this year’s fiscal plan.

Presenting the new figures in Abuja, the Director General of the DMO, Ms. Patience Oniha, attributed the growing trend in borrowing by the country to a bouquet of reasons, including revenue generation challenge; fragile nature of the Nigerian economy; lack of utilisation of the Public Private Partnership (PPP) models in project delivery in the country, leading to huge deficit budgets and necessitating borrowings and the lack of diversification of the Nigerian economy, which is still dependent on crude oil earnings, with its price and supply shocks.

The new public debt figure indicates that between September 2018 and same time last year, the sum of N4trillion was contracted in new debt obligations, raising the stock from N22.428trillion to the current N26.215trillion.

According to Oniha: “The total public debt, comprising the debt of the Federal Government, 36 states and the Federal Capital Territory (FCT), as at the end September last year stood at N26.215trillion.

“The comparative figure for June last year was N25. 701trillion, which implies that in the quarter July to September last year, the total public debt grew by 2.0 per cent.

“The total public debt as at end September last year includes promissory notes in the amount of N821.651billion, which was issued to settle the federal government arrears of oil marketing companies and state governments under the Promissory Programme approved by the Federal Executive Council (FEC) and the National Assembly.”

She also said: “Whereas the last year Appropriation Act provided for a total borrowings of N1.605trillion, split equally between domestic and external, only the domestic component of N802.82billion was actually raised, due to the late passage of the Act and the expectation that the implementation of this year’s budget would commence on January 1.”

Oniha, while defending the growing nature of the Nigerian debt stock, explained that much of the proceeds of the borrowing had been invested in critical projects across the country, including the Lagos-Kano Rail line, the Mambila Power projects, among several roads.

She insisted that the impact of the financing of the critical projects was instrumental to helping the country exit recession in 2017, as the deployment of funds to contractors played a significant impact in liquidity supply in the country

She said the current level of Nigeria’s total public debt represents 18.47 per cent, far below the 25 per cent threshold allowed for countries of Nigeria’s status, declaring that the country still has a lot of room for borrowing.

“The total debt as a percentage of GDP is 18.47 per cent as at September last year and is within limit of 25 per cent and fares better in comparison with the debt/GDP ratios of countries such as the United States (US), United Kingdom (UK) and Canada, with ratios of 105 per cent; 85 per cent and 85 per cent, respectively.

“However, because they generate adequate revenues, their debt service/revenue ratios for the same period were much lower at 12. 5 per cent; 7.5 per cent and 7.5 per cent, respectively,” the DMO boss further lamented.

She listed part of DMO’s achievements last year to include the issuance of a 30-year Federal Government Bond for the first time, explaining that the issue was to meet the investment needs of long-term investors, such as insurance companies, and support the development of the domestic financial requirements in areas, such as mortgages.