NHRC may prosecute Madonna Varsity’s VC, others for ‘torturing’ students

The National Human Rights Commission (NHRC) has said it will prosecute the Vice Chancellor of Madonna University and two other senior officials in relation to a case where some students were tortured on suspicion of being members of cult groups.
NHRC’s Executive Secretary Professor Bem Angwe said yesterday his commission might prosecute the officials if they failed to honour a fresh invitation to appear before the commission.
The commission, on August 10, invited officials and authorities of the Army for two separate incidents of torture.
While the Army authorities were invited for the inhuman treatment meted out to a civilian in Nyanya, Abuja, by a soldier, and requested the culprit be identified, the university officials were invited for the torture of two students, Stanley Okoye, a 23-year-old final-year Civil Engineering student and Ga-Lim Aondofa Lord.
Prof Angwe, who spoke in Abuja after receiving a team from the Army, said the vice chancellor had refused to appear on the excuse that the matter was in court, and that the commission should allow the court to handle it.
He said although the commission had issued the VC and his officials fresh invitations to appear on August 25, the commission believed the university authorities failed to  appreciate the powers of the commission.
“The victims and their parents were here yesterday, but the vice chancellor and the two officials did not come. We received a letter from the vice chancellor, who said the matter is in court and that believes the Human Commission should allow the court to determine the case.
“We are not satisfied with that. It is not for the vice chancellor to write us that the matter is in court. They (the VC and two other senior officials) need to appear.
“We have given them a new date to appear on August 25. And if by that date the vice chancellor and the officials  are not here, we are going to prosecute them.
“The vice chancellor acted in ignorance by not understanding that he is supposed to appear, and that if he has a defence, or the matter is in court, he should show us certified true copies of the processes in relation to the matter in court. It is for us to determine whether the subject matter is the same with what we want to deal with.
“If he does not appear on August 25, we will prosecute him for failing to obey a lawful directive issued by the commission. There are two options left for us if a person refuses to honour our invitation.
“First, the failure to appear before the commission, when invited, is an offence in itself. It carries a penalty of six months’ imprisonment. After serving the punishment, we can still issue a bench warrant to compel the person’s presence here.
“We are not wasting time on issuing a bench warrant. We will punish such a person first, for the offence of not obeying the lawful directive of the commission that he appears in respect of the complaint of right abuse against his organisation,” Angwe said.
He hailed the Chief of Army Staff (COAS) for the steps taken in the Nyanya case.
“We are satisfied with the way the authorities of the Army has handled the case.
“As soon as we communicated with the Chief of Army Staff and gave the Army 72 hours within which to identify the soldiers involved, the COAS, within two hours communicated to us to say they have indeed, found the culprit.
“That quick response was pleasing to us. Secondly, today, the COAS has sent a team of senior officers, led by a general. They also brought the culprit, who is attached to the Guards Brigade,” Angwe said.
The NHRC chief, who did not disclose the identity of the soldier, said the soldier was attached to the Guards Brigade.
He said the Army’s account on the Nyanya incident was that the civilian was  caught by a mob while robbing, and that the soldier intervened to save the victim (the alleged robber).
“They said if the soldier did not intervene, the mob would have killed him. But, we have invited the victim, who will appear tomorrow. This will enable use verify the story of the Army,” Angwe said.
Director of Legal Services, Nigerian Army Brigadier General Yusuf Shalangwa, who led the Army team, confirmed that the soldier had been identified and was being subjected to internal disciplinary measures.
Shalangwa said the NHRC would be informed about the outcome of its investigation and other steps the Army decides to take in the case.
The Nation 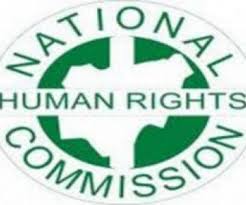