Homicide detectives attached to the State Criminal Investigation Department (SCID), Panti, Yaba, have begun a manhunt for suspected ritual practitioners, who allegedly connived with a 16 year old boy to slaughter a 4 years old toddler in Lagos.
The 16-year-old suspect, Tajudeen Azeez, allegedly murdered the toddler, identified as Ibrahim, at Ijanikin in Otto Owori Local Council Development Area of Lagos State on Sunday, and removed the boy’s kidney and intestines.
Azeez, who is a neighbour of the deceased’s parents, said he was paid N100 to get fresh human parts, and he saw the deceased as an easy target after his parents went out, and left him alone in the house . The suspect narrated that he lured the victim with biscuits to a church in the neighbourhood when the mother of the boy went to the hospital to give birth to another child. The bereaved father, Mr. Jamiu Hassan, said though he should be a happy man following the birth of another child, the murder of his four years old son has brought sadness to his family. He said: “I was out that day to the hospital because my wife was in labour. When I came back home, I discovered that Ibrahim was missing. I took my wife to the hospital on Saturday when she was about to go into labour. I came and slept at home only to go back to check my wife on Sunday morning. When we came back from the hospital, we could not find my Ibrahim at home. “I asked my elder son where his brother was, but he told me that they were playing outside the house when the suspect came and lured him away with sweet and confectionaries before he was later killed. When we could not find Ibrahim, I reported his missing to the Oba of Ijanikin and other residents, and for two days we were looking for him, but to no avail. My son’s killer is my neighbour.
He slaughtered him like a ram, and removed his kidney, intestines and penis for ritual. He was declared missing for two days.” Lamenting the brutal murder of his son, Mr. Hassan said, “They have killed my president because Ibrahim used to tell me that one day, he would become the head of state of Nigeria. I want the Lagos State Governor, Akinwunmi Ambode, and the Commissioner of Police to come to my aid, because I don’t want the case of my son to be swept under the carpet like other unresolved murdered cases in the country.” Felicia Hassan, the mother of deceased boy could not hold back tears as she narrated how her son was murdered. She said: “Since my son was murdered, I have not being able to eat or sleep. Can I get pregnant now and have baby Ibrahim again; it is not possible. I want the governor and other human rights organisations to come to our rescue.”
The grandfather of the deceased, Alhaji Taiwo Hassan, said the Police should intensify efforts to arrest the other suspects presently at large. He said: “I came from Abeokuta because of the incident. When I got to the station, I was told by a senior officer that some chiefs in the community were coming to bail some of the suspects fingered by Azeez, who allegedly were accessories to the crime.
“The DPO gave me the assurance that the suspects will be transferred to SCID Panti for further investigation, because I don’t want a repeat of some of the cases we have witnessed in the past.” The suspect however blamed the devil for luring him to kill the boy. He said: “We lived at 7 Jewugbadun Street, Okokomaiko, before we moved to Moshalashi Street in Ijanikin, sometime last year. Sincerely Ibrahim didn’t offend me neither did his parents. I have known him since we moved to this area. I play with him and buy him biscuits and sweets. I am an apprentice with a local furniture workshop in the neighbourhood. I removed his kidney and intestines, and I abandoned them at a nearby bush when people were coming, before I was arrested. I haven’t committed this kind of crime before. It was Osan that sent me to help him get human parts. It was this morning that I lured Ibrahim to Anglican Primary school where I used a knife to kill him.”
-National Mirror 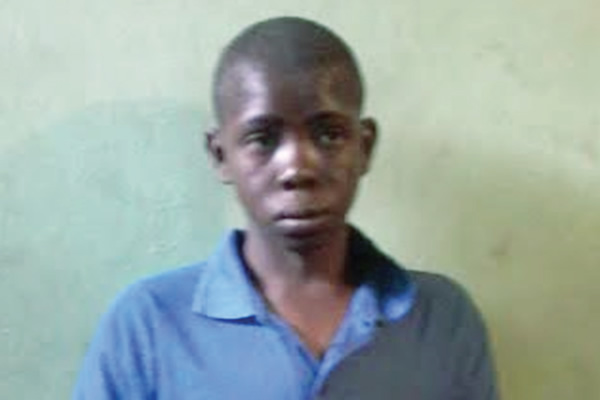