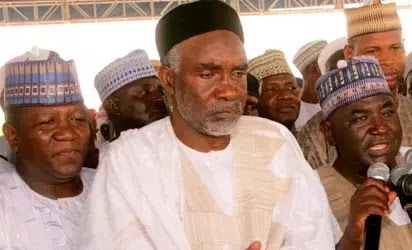 Two days after they were remanded in the custody of the Economic and Financial Crimes Commission, EFCC, over charges bothering on money laundering, former Governor of Adamawa State, Admiral Murtala Nyako (rtd)  and his son, Abdulaziz, yesterday, secured bail from the Federal High Court sitting in Abuja.
Ruling on consolidated bail application that was moved by their lawyer,  Chief Kanu Agabi, SAN, yesterday, trial Justice Evoh Chukwu ordered the accused persons to pay the sum of N350million each.
They court further ordered them to produce two persons to stand as their sureties or in the alternative, provide one surety who must be a serving Director in any federal government establishment.
The surety according to the court  must show a proof of ownership of landed property in Abuja, depose to an affidavit of means before the Deputy Chief Registrar of the High Court, as well as, show evidence of three years tax payment.
Besides, the accused persons were directed to surrender their international passport to the court alongside their two recent passport photographs.

Specifically, Nyako and his son who is a serving Senator,  were accused of diverting over N40billion from the Adamawa State treasury between January 2011 and December 2014.
The duo were on Wednesday docked before the high court on a 37-count criminal charge bothering on money laundering, abuse of office and misappropriation of public funds.
They are facing trial alongside their alleged accomplices- Zulkifikk Abba and Abubakar Aliyu.
Five companies that allegedly served as conduit pipes for the illegal diversion of the funds-Blue Opal Limited, Sebore Farms & Extension Limited, Pagoda Fortunes Limited, Tower Assets Management Limited and Crust Energy Limited, were equally charged as the 5th to 9th accused persons.
The accused persons had shortly after they pleaded not  guilty to the charge, begged trial Justice Chukwu to release them on bail, a prayer that was declined, even as the court ordered their remand in EFCC custody.
Meantime,  at the resumed sitting yesterday, the EFCC vehemently opposed Nyako’s application for bail. Arguing a 20-paragraphed counter affidavit that was sworn to by one Adekunle Christopher Odofin,the prosecuting counsel, Mr. Rotimi Jacobs, SAN, relied on three exhibits (RG1- RG3), and insisted that the accused persons would jump bail if released.
The EFCC stressed that Nyako and his son went into hiding the last time it granted them administrative bail, saying they only returned to the country after May 29 when President Muhammadu Buhari assumed office.
“We submit that whether to admit the applicants to bail or not, is at the discretion of the court. In exercising that discretion, it is always guided by certain principles so that the exercise can be judicial and judicious. Some of those conditions are enumerated in section 162 of the Administration of Justice Act, 2015.
“Bail is not automatic and the accused persons have not placed sufficient materials before this court to warrant the exercise of discretion in their favour”, the EFCC lawyer contended
(Vanguard)