Lawmakers have uncovered 25 fresh errors in this year’s budget, it was learnt yesterday. The items involved are allocated about N37, 025, 238, 407.
Of the amount,  about N21,623,323,649 voted for office repairs was  rated “avoidable” by the Senate and House of Representatives committees on Appropriation.
But there were indications that the committees may have drawn the attention of the Ministry of Budget and National Planning to the errors.
The Chairman of the Senate Committee on Appropriation, Sen. Danjuma Goje, and the Chairman of the House Committee on Appropriation, Hon. Jibrin Abdulmumin, were making frantic efforts last night to meet Tuesday’s deadline for the passage of the budget.
The two committees and the Ministry of Budget and National Planning were making last-minute consultations as at press time.
The errors were discovered at the last stage of the budget’s consideration.
It was gathered that the errors spotted by the National Assembly tallied with the input from many Civil Society Organisations, including CLP/ Reclaim Naija.
It was learnt that the mistakes are in the following eight areas:
Duplication of budget line items;Budget items with quantities not specified;Budget items with no location;Large amount of money being appropriated for rehabilitation/repairs of office /residential buildings and purchase of office furniture and fittings;Budget items repeated over the past four years;Curious budget line items;Non-priority budget items; andWrongly classified budget items
A document obtained from the National Assembly lists the breakdown of the errors, including curious budget line items(N6, 411,661, 956); duplication of projects(N3,567,605, 395); non-priority project items(N5, 422, 647,407); office repairs/ rehabilitation(N21, 623, 323, 649).
A source in one of the committees said: “We have identified 25 new errors in the budget involving about N37, 025, 238, 407billion.
“From the budget, we have discovered that the vote for the generation of 700 MW from Zungeru hydropower project was duplicated seven times and titled MOPWH161021632-40. For the same project, the amounts voted are as follows N750m, N113, 465, 000, N139, 426, 180, N126, 624, 383, N93, 767, 500 and N160, 000, 000.
“The National Bureau of Statistics projected to spend N256, 920,000 and N230, 705, 000 in the same budget on procurement of equipment, vehicles and furniture. At our session, we were amazed that we could still be having two estimates for the same project. Also, the Federal Roads Maintenance Agency (FERMA) is planning to execute Integration of Road Reference System with N150, 940,000 (FERMA 18015998) and N15,000, 000(FERMA 18021621) respectively.
“On its part, the National Intelligence Agency(NIA) is expected to use N2, 479, 581, 721 as refund to states for Federal Government Road Projects and the Ministry of Youth and Sport will spend N1, 731, 050,000 on kitting of Armed Forces and the Federal Airport of Nigeria(FAAN) has been allocated N340, 707, 625 for Wildlife Conservation. These are evidence of padding still subsisting in the budget.
A document on the analysis of the budget in possession of the appropriation committees reads: “From less than a dozen MDAs, over N21 billion can be saved and re-allocated to create needed jobs for the millions of unemployed youths.
“The money budgeted for rehabilitation/repairs (N10,774,052,415.00) by the ministry of Interior alone is more than double the entire budget of the Ministry of Women Affairs (N3,974,395,038). “More money should rather be voted for the Ministry of Women Affairs to be able to invest in the economic empowerment of women.
“The MDAs will not collapse if these projects are postponed to a future date when the country can easily afford to execute them.
“In the budget of the Office of the Secretary to the Government of the Federation(OSGF), Procurement and Installation of security system has become a recurring decimal.”
The source added: “With due respect to SGF Babachir Lawal, we have realised that those in charge of the budget of OSGF might have committed blunders. For 2016, the OSGF has budgeted N1, 710, 322, 610 for procurement and installation of security system. The same office budgetted the following amounts in the last three years on the same item: N527, 000,000(2013); N1, 161, 356, 582(20140 and N316, 420, 274(2015).”
A source in the Ministry of Budget and National Planning,  said: “We are not aware of the so-called fresh errors in the budget.
“The budget is a proposal sent to them, it is their constitutional role to vet, amend, and come up with a clean copy.
“The minister of budget and national planning  met with the appropriation committees about three  weeks ago and he told them that the Executive was not expecting the National Assembly to pass the budget as presented.
“The budget is the property of the National Assembly now, we will not comment until they return it.”
The Nation 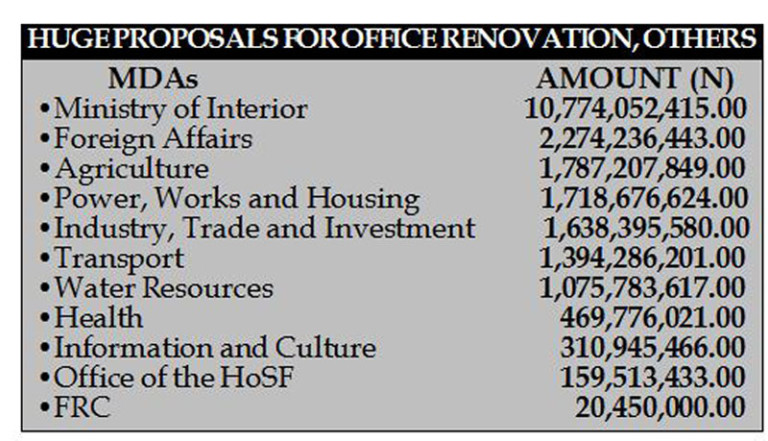