Some Lagos lawmakers on Thursday made a passionate appeal to, President Muhammadu Buhari, to urgently bail out states who have failed to pay salaries to forestall workers’ revolt.
About 18 states of the federation cannot pay their workers’ remuneration due to paucity of funds.
Mr Abiodun Tobun (APC-Epe1), said: “I am of the opinion that to get out of this mess, the Federal Government should bend backwards, to rescue states that cannot pay workers’ salary for months.
“The states cannot meet up, the Federal Government should as a matter of urgency, set aside capital projects for now to address this problem.
“It will get to a stage where workers will begin to revolt because states can no longer meet up with their obligations.
“Let the whole world know what the Federal Government is offering them, it should not be in form of loan, it should be outright bail out,’’ he said.
Tobun, however, urged indebted states to make the salary of workers the number one priority before embarking on other projects.
According to him, the affected states should be ready to look inward and explore other means that will add value to their government in terms of revenue generation.
The lawmaker, who blamed the current economic challenges of the country on absence of true federalism, said; “hardships will continue as long as states lack the power to be in control of their generated revenue.
“The percentage going to the federal is higher compared to what comes to the state and the local governments.
“That is why many states are indebted and finding it difficult to meet financial obligations,’’ he said.
According to him, in true federalism, states generate revenue and send an agreed percentage to the central government.
Mr Adebisi Yusuff (APC-Alimosho 1), said: “people are not being fair to the governors, we found ourselves in this mess because we do not practice the principle of fiscal federalism.
“Once there is fiscal federalism, there will be healthy competition amongst states.
“What the Federal Government is taking is too much whereas the responsibilities of the state government are more than that of the Federal Government.
“I will suggest that the Federal Government should bail out the states, it is not the fault of those affected states, not all states can be like Lagos State,’’ Yusuff said.
The assemblyman, therefore, urged state governors to improve on their internally generated revenues, saying; “those who have arable land should concentrate on agriculture’’.
(NAN)
Business Day

Thu Jun 25 , 2015
The Economic and Financial Crimes Commission has begun investigation into alleged theft of N108.1billion of Akwa Ibom funds by former Governor Godswill Akpabio. The action followed a petition forwarded to the commission by an Abuja- based lawyer and activist, Leo Ekpenyong. Mr. Ekpenyong had on June 8 petitioned President Muhammadu […] 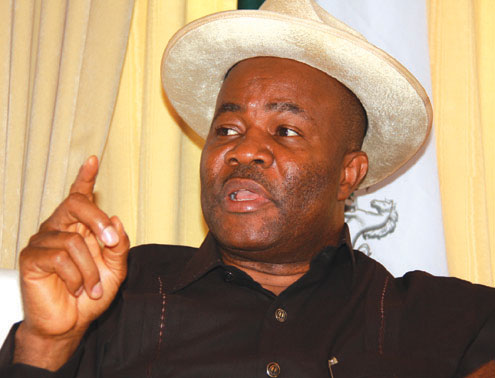