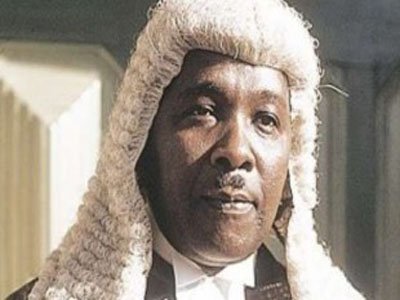 Justice Adeniyi Ademola of the Federal High Court and his wife, Olabowale, were arraigned yesterday before a High Court of the Federal Capital Territory (FCT) in Maitama, Abuja.They were arraigned on an 11-count charge of conspiracy and receipt of gratification, to which they pleaded not guilty.Dressed in a navy blue suit and a sky blue shirt, Justice Ademola and his wife (who was dressed in a navy blue skirt and a blue shirt with a flowery pattern), arrived the courtroom shortly before 9am.The proceedings began around 9.30am when the case was called, and Justice Ademola and his wife were ushered into the dock.They were later allowed to sit down. The husband sat inside the dock, his wife just outside? the dock because it was not spacious enough to accommodate both of them.They pleaded not guilty to each of the 11 counts when they were read out by an official of the court.Justice Ademola’s lawyer, Onyechi Ikpeazu (SAN), and Robert Clarke (SAN), who represented the wife, informed the court that they had filed bail applications for the defendantsProsecution lawyer Segun Jegede said he was not opposing the bail applictions, but urged the presiding judge to impose terms and conditions that would make the defendants attend their trial.Jegede said: “In principle, we are not objecting to the applications. Given the circumstances of this case, the standing of the defendants, and the rapidly approaching Christmas.“However, in doing that, I will apply that the court imposes conditions that will make the defendants to attend trial.“They must be made to give undertaking that they will attend trial. They must not interfere with witnesses and they must not destroy evidence,” Jegede said.He urged the court to compel the defendants to deposit their passports and other travel documents with the court registrar.Ikpeazu and Clarke objected, and urged the court not to impose bail conditions that were in excess of the bail conditions granted the defendants by the Department of State Services (DSS) after their arrest on October 8.Ruling, Justice Jude Okeke granted bail to the defendants at N50m each and on self-recognisance.By the condition of the bail, Justice Ademola and his wife are only required to endorse a bond of N50m each. They are not required to produce sureties to stand for their release.Justice Okeke adjourned to January 18 for the prosecution to open its case.Immediately the judge adjourned the case and rose briefly, Justice Ademola and his wife wasted no time in exiting the courtroom.To avoid photographers, who had stationed themselves directly outside the main entrance to the courtroom, Justice Ademola and his wife were assisted out of the courtroom by court officials, through a back door.In the 11-count charge, marked CR/21/2016, filed on December 1, 2016, the couple is accused, in count one, of conspiring, between March 11 and 24, 2015, to receive gratification from Messrs Joe Agi and Associates through their accounts marked: 206/174191/2/0 and 201/110160/1/0 domiciled at GTBank Plc an offence contrary to Section 26(1)(c) of the Corrupt Practices and other related Offences Act 2000.The wife is accused in counts two, three, four of receiving N10m gratification three times, from Messrs Joe Agi and Associates, through her GTBank account on behalf of her husband between March 11 and 24, 2015 – an offence contrary to Section 8(1)(a) of Corrupt Practices and other related offences Act 2000.Justice Ademola is accused, in counts five and six of “dealing with property subject matter of an offence,” by transferring N85m and N90m consecutively on February 24, 2014, through his account marked: 286/174191/2/0 in GTBank to Franco Dan Parker, “which forms the proceeds of an unlawful act and thereby committed an offence contrary to Corrupt Practices and other related offences Act 2000.The judge is accused, in count seven, of attempting, on February 21, 2014, to obtain gratification of N25m from Sani Shaibu Teidi “as a motive for showing favour in the exercise of your official functions, contrary to Section 118(b) of the Penal Code Act.He is, in count eight, accused of receiving gratification of “a BMW saloon 320i, valued at N8m from Joe Odey Agi, through his son, Ademide Ademola – an act contrary to Section 8(1)(a) of the Corrupt Practices and other related offences Act, 2000.In count nine, 10 and 11, the judge is accused of illegally possessing firearms and ammunition (one Avar Magnum 608, Avar Magnum 6284) and 35 rounds of live ammunition (catridges) without valid licences, and thereby committed an offence contrary to Section 3 of the Robbery and Firearms (Special provisions) Act 2004.