Justice Ahmed Mohammed of the Federal High Court Abuja has withdrawn from the trial of Independent People of Biafra (IPOB) leader and Radio Biafra Director Nnamdi Kanu.
Justice Mohammed directed that the case file be returned to the court’s Chief Judge for reassignment to another judge.
This followed Kanu’s alleged frustration of his arraignment. Kanu told Justice Mohammed that he doubted his ability to conduct a fair trial.
Kanu and his associates, Benjamin Madubugwu and David Nwawuisi (said to be a Field Maintenance Engineer with MTN Nigeria Limited), were to be arraigned on a six-count charge of treasonable felony, managing unlawful organization, illegal possession of firearms, among others.
After the case was called, Kanu sought the court’s permission to address it, which the judge granted without objection from his lawyer, Vincent Obetta and the Director of Public Prosecution of the Federation, Muhammad Diri, who led the prosecution team.

Kanu said he lacked confidence in the court, and that based on information available to him, he might not get a fair trial.
“I will not sacrifice the due process founded upon the principle of natural justice on the altar of speedy release from detention. I will rather remain in detention than subject myself to a trial that amounts to perversion of justice
“There have been several rulings delivered by competent courts of jurisdiction, which the DSS never respected.”
Kanu’s lawyer, Obetta, also supported his client, justifying Kanu’s liberty to decide whether or not he has confidence in a court before which he was to stand trial.
But Diri objected, insisting that it was not within the liberty of a defendant to pick his court of trial. He relied on the provision of Section 396(2) of the Administration of Criminal Justice Act (ACJA) 2015 to argue that a defendant could only object to a charge after pleading to it.
He urged the judge to proceed with the planned arraignment of the defendants.
Justice Mohammed overruled Diri’s objection and held that a defendant had the right to pick the court to be tried.
“Justice is rooted in confidence. If a party has no confidence in this court, he has the liberty to say so. If it was the prosecution who did not have confidence in the court, will it not say so? Section 396(2) of the ACJA has nothing to do with the nature of objection raised by the first defendant. He is not challenging the competence of the charge, but his lack of confidence in the court to try him,” Justice Mohammed said.
Court documents revealed that the prosecution has lined up eight witnesses to prove its case. It planned to tender items, including Biafra flags, currencies, firearms and transmitters, allegedly recovered from the defendants’ homes. The prosecution said the defendants used the transmitter to broadcast some inciting statements.
The document said: “We shall lead evidence to show that, in the course of such broadcast, the first defendant (Kanu) urged his listeners to burn, as many police stations as possible, and kill any policeman, military personnel, and other security operatives sighted in Aba.
“To ensure a wider coverage of Radio Biafra, Kanu smuggled a radio transmitter Model TRAM 50L into the country and the details of how that was done shall be led in evidence during trial.
“The first defendant operates four accounts in furtherance to achieving the cause of IPOB.
“The third defendant (Nwawuisi), a Field Maintenance Engineer, responsible for maintaining MTN masts in Enugu State, was arrested in the course of investigation. He agreed, on the request by an IPOB member, (Chidebere Onwudiwe), now at large, to install IPOB radio transmitters on MTN masts for a consideration.”
THE NATION 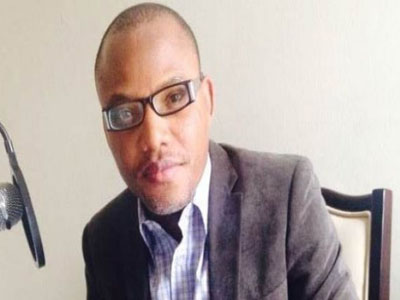