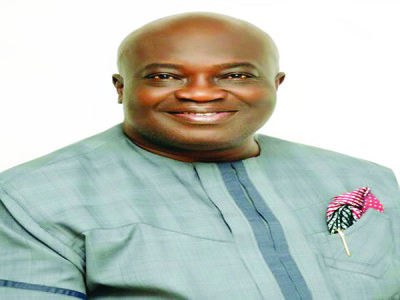 Governor Okezie Ikpeazu yesterday urged Abia State residents not to panic after a court ordered him to vacate office immediately.
In a statement, the Chief Press Secretary to the governor,  Enyinnaya Appolos, said Ikpeazu will appeal the judgment
The governor noted that as an appointee of the Abia State Government from 2011 to 2014, when he served as the General Manager, Abia State Passengers Integrated Manifest and Safety Scheme (ASPIMSS), and first Deputy General Manager, Abia State Environmental Protection Agency (ASEPA) Aba and Environs, before his resignation in October 2014 to contest the governorship election, his taxes within the period  were deducted at source. When he needed  his tax clearance in 2014, he applied to the Abia State Board of Internal Revenue and was issued with his tax receipts for the period in question, he said.
Ikpeazu maintained that he remained the governor, according to the law, and will await the final determination of the matter by the appellate courts.
Justice Okon Abang of the Federal High Court sitting in Abuja yesterday voided Ikpeazu’s election on the ground that he was not qualified to have contested.
The judge held that the evidence before the court supported the plaintiff’s position that Ikpeazu made a false claim in relation to the information he submitted to his party, the Peoples Democratic Party (PDP), for onward submission to the Independent National Electoral Commission (INEC).
Justice Abang, who upheld arguments by plaintiffs’ lawyers Alex Iziyon (SAN) and Femi Falana (SAN), said having lied about his tax clearance certificates and personal income tax receipts, Ikpeazu failed to meet the requirement under Article 14(a) of the PDP Electoral Guideline for its primary elections.
The judge said as against the requirement under Article 14(a) of the PDP Guideline, requiring a candidate for its primary election to provide evidence of his payment of personal income tax as at when due in the last three years, there was no reliable evidence before the court that Ikpeazu paid his tax regularly three years before he contested the party’s primary on December 8, 2014.
The judge spoke in two separate judgments in the suits by Dr. Samson Uchechukwu Ogah vs. PDP and Obasi Uba Eleagbara and 2 others vs. PDP and two others.
“He lied in his declaration to INEC that he fulfilled all requirements to stand election, whereas he did not. The issue before the court is disqualification to participate in the first defendant (PDP’s) primary election for Abia State. It is not whether he was qualified under Section 177 of the Constitution to contest the governorship election.
“Since there is no provision for independent candidate, it is material that he must first meet the PDP requirement as stipulated in Article 14(a) of the PDP Electoral Guidelines,” the judge said.
The judge said since Ikpeazu was not qualified to contest the PDP primary by making false claim in his tax information submitted to his party, and which his party later submitted to INEC, he breached Section 31 of the Constitution.
Justice Abang ordered the PDP to submit  to INEC as its candidate for the last governorship  election in Abia, the name of the aspirant with the second highest votes in the party’s last primary because Ikpeazu, who came first, was not qualified to participate in the primary. He said the votes recorded in the primary by Ikpeazu were wasted votes.
The judge, who identified several discrepancies in the tax documents Ikpeazu submitted to his party, noted that the three receipts bore the same date of July 4 for the annual income tax he claimed to have paid in 2011, 2012 and 2013.
He noted that if, as he claimed that his annual income tax was deducted annually by his employer, being a civil servant, he ought to have simply obtained evidence of such payment from his employer and not obtain receipts form the State Tax Board, with similar dates and serial numbers. He noted that one of the receipts carried December 31, 2011 as its issuance date, but pointed out that the date was a Saturday, a no-work day in Abia State. He wondered why the receipt was issued on Saturday.
“Tax clearance certificate submitted by the 3rd defendant (Ikpeazu) to INEC is false. It is not tax clearance known to law. Ikpeazu was and is not a candidate of the PDP for the election held in April 2015. The plaintiff’s claim deserves to succeed and judgment is given in his favour,” the judge said.
Justice Abang declared that Ikpeazu’s INEC Form 001 and the tax clearance certificate contained false information regarding his tax payment. He ordered his disqualification from the primary election.
“Having failed to pay his income tax as at when due, and having made false claim, he is not a fit and proper person to contest the election. Order is made disqualifying the 3rddefendant from contesting the election for submitting tax documents containing false information regarding his tax payment.
“It is declared that the person, who scored the second highest votes, Dr. Samson Oga, is the rightful candidate of the PDP for the election. Order is made directing the PDP to forward his name (Oga’s) to INEC an its rightful candidate for the election,” the judge said.
The judge dismissed all the preliminary objections raised against both suits by the defendants and held, among others that his court has the jurisdiction to hear the cases, the plaintiffs posses the locus standi to institute the cases and that the issues raised for determination were not overtaken by event.
The Nation