By Evelyn Usman and Esther Onyegbula
LAGOS—Fresh facts have emerged in the Ikorodu banks robbery operation where N80 million was reportedly carted away a fortnight ago, following the discovery that 12 members of the gang were recruited from the Niger Delta region.
This is just as the four suspects arrested in connection with the operation, that lasted close to two hours, have confessed that their gang was responsible for similar operations at Ijede road three weeks before that of Ipakodo also at Ikorodu, and that of Lekki, where five persons, including three policemen, were killed.
The arrested suspects include Omoboye, alias Alarm blow, 39; Bright, 25; Ikuesan, 37, and Abiwa, 20.
The bank robbery, according to Bright, was carried out by an 18-man gang. Bright, a graduate of English/Christian Religious Study, CRS, from the College of Education, Ekiadolor, Edo State, said a meeting with members of the gang, chaired by the gang’s leader, whose identity he gave as Million, was held in Abule area of Lagos same day the operation was carried out.
My role’
The father of two said: “Million is our leader. I was introduced to the gang by a friend named Akpan. I joined because I had no means of feeding my family. I am a wood logger, but business has been bad.
“Akpan took me to the gang’s meeting same day of the operation, on June 24, at Abule Ishawo area of Ikorodu. Those of us from Lagos included myself, M. O., Kelvin, S. K. Careboy and Million, while the rest were recruited from Warri, Delta State by Million.
“He also brought eight riffles and two pump action guns from Warri, including the two operational vehicles. He taught us how to aim at our targets during the meeting, which lasted for 30 minutes, with each of us instructed on what to do on reaching the venue.
“My role was to stand outside, with one of the pump action guns, shooting sporadically. I was also instructed to shoot at anyone who dared to intrude, while the boys recruited from Warri confronted the police.
“I had over 900 cartridges. At the end of the operation, we escaped in a fibre boat and went to the creeks, where the loot was shared. At the creeks, we analysed the operation and Million said we did well, promising to use us for subsequent operations
Credit : Vanguard 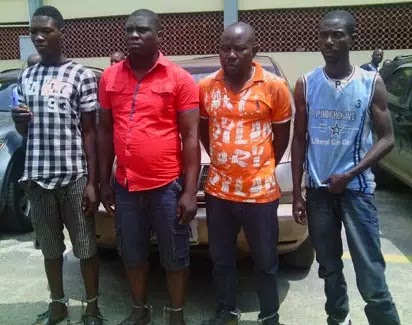