Government may review 2020 budget over coronavirus 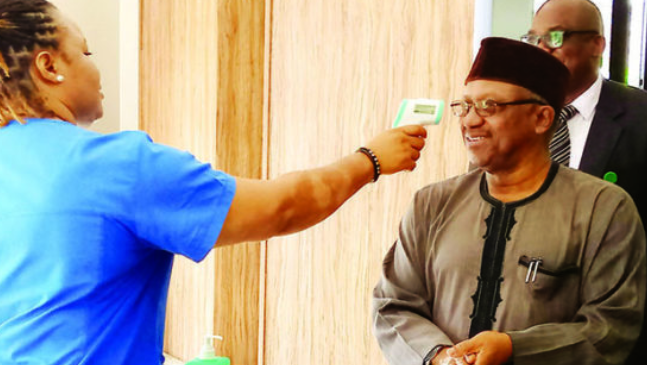 The devastating impact of the coronavirus outbreak may make the government review its 2020 national budget of N10.95 trillion. The Minister of Finance, Budget and National Planning, Zainab Ahmed, revealed this yesterday.

She spoke while briefing newsmen on the outcome of the Federal Executive Council (FEC) meeting presided over by President Muhammadu Buhari at the Presidential Villa, Abuja.

This came as Minister of Health, Osagie Ehanire declared that the identity of the Italian diagnosed of the dreaded coronavirus will only be released with the express permission of the victim. Ehanire explained that it was unethical for the authorities to disclose the full names of the victim who is entitled to medical confidentiality and currently being isolated.

The minister said the prevailing circumstance was not similar to Patrick Sawyer, the Liberian-American lawyer who was notable for being the index case for the introduction of Ebola virus disease into Nigeria during the West African Ebola epidemic.

Fielding questions on the economic impact of the health challenge to the national economy, the Minister of Finance, Budget and National Planning said: “We are concerned because it does have an impact on revenue and the current crude oil price of 53 per cent is below the budget benchmark.

“What we are doing is that we are studying the situation and when the budget was passed we committed to do a midterm review. We will do the midterm review and if the revenues are so significantly affected, we will have to do some revisions in the budget by way of budget adjustment.

“I will want to inform that the crude production is now at two million barrels per day and in some days, it has moved up to 2.1 million barrels per day so that in itself will be a cushion. All the same, we are not taking any measures now until we have a reasonable period when we make a review and then we may need to make an adjustment of budget though, working together with the National Assembly.”

She announced the approval of the contract to be funded by a facility from China towards facilitating the construction of a gas pipeline from Ajaokuta to Kano, at a revised cost of $2.57 billion. She said this would be jointly done with the Nigerian National Petroleum Corporation (NNPC), which will pay 15% of the sum.

Meanwhile, apart from the devastating impact of the coronavirus outbreak on humans, the global economy has lost as much as $50 billion to the disease, the United Nations disclosed yesterday.

In Nigeria, there have been indications that prices of goods mainly imported from China, especially mobile phones, pharmaceuticals and clothing could surge depending on how quickly the virus is contained.

A report published yesterday by the United Nations Conference on Trade and Development (UNCTAD) said the strain of the virus otherwise called COVID-19 has the potential to significantly slow down not only the Chinese economy but the global economy.

Amid realities that China has become the manufacturing hub of many global business operations, including Africa, and particularly Nigeria, the report noted that any disruption of China’s output is expected to have repercussions across the world.

With China’s manufacturing Purchasing Manager’s Index (PMI), a critical production index, falling to 37.5 as its lowest reading since 2004, the report titled “The Effects Of The Covid-19 On Global Production Networks: UN Evaluation”, stated that the drop implied a two per cent reduction in output on an annual basis. The global body said that the development came as a direct consequence of the spread of coronavirus.

“Indicators on shipping also suggest a reduction in Chinese exports for the month of February. Container vessel departures from Shanghai were substantially lower in the first half of February with an increase in the second half. However, the Shanghai Containerized Freight Index continues its decline thus indicating excess shipping capacity and lower demand for container vessels.”

“Over the last two decades, the People’s Republic of China became the world’s largest exporter and an integral part of global production networks. China has established itself as a key provider of inputs and components for many products, such as automobiles, cellphones, medical equipment, and more,”

According to UN, even if the outbreak of COVID-19 is contained mostly within China, the fact that Chinese suppliers are critical for many companies around the world implies that any disruption in China will also be felt outside the country’s borders.

As the world moves to contain the disease, a vaccine for COVID-19 developed by Moderna Therapeutics will be ready for human testing as early as April.

According to a report in Time, Moderna Therapeutics, a biotech company based in Cambridge, Massachusetts, has shipped the first batches of its novel coronavirus (COVID-19) vaccine.

The vaccine was created just 42 days after the genetic sequence of the COVID-19 virus, called severe acute respiratory syndrome coronavirus 2 (SARS-CoV-2), was released by Chinese researchers in mid-January.

According to the report in Time, NIH scientists also began testing an anti-viral drug called Remdesivir that had been developed for Ebola, on a patient infected with SARS-CoV-2.

The trial is the first to test a drug for treating COVID-19 and will be led by a team at the University of Nebraska Medical Centre. The first patient to volunteer for the study is a passenger who was brought back to the US after testing positive for the disease aboard the Diamond Princess.

Other patients diagnosed with COVID-19 who have been hospitalised will also be part of the study.

The World Health Organization (WHO) called on industry and governments to increase manufacturing of personal protective equipment by 40 per cent to meet rising global demand due to COVID19.

It noted that severe and mounting disruption to the global supply of personal protective equipment caused by rising demand, panic buying, hoarding and misuse is putting lives at risk from the new coronavirus and other infectious diseases.

The global health body, in its twitter handle, yesterday, observed that healthcare workers relied on personal protective equipment to protect themselves and their patients from being infected and infecting others.

According to the WHO, shortages are leaving doctors, nurses and other frontline workers dangerously ill-equipped to care for COVID19 patients.

The Director-General of WHO, Tedros Adhanom Ghebreyesus, said that without secure supply chains, the risk to health workers fighting COVID19 around the world was real, adding that industry and governments must act quickly to boost supply, ease export restrictions and put measures in place to stop speculation and hoarding.

The World Bank Group is providing up to $12 billion in immediate support for countries coping with the health and economic impacts of the COVID19 outbreak.

In its twitter handle, the group said that the financial package would be globally coordinated to help countries address the challenges posed by the COVID19.

Meanwhile, President of the Senate, Ahmad Lawan, has asked the Minister of Finance, Zainab Ahmed, to immediately release N620 million to the Nigerian Centre for Disease Control (NCDC), an amount budgeted for an emergency response to the Coronavirus (COVID – 19) outbreak.

He made the call yesterday when the leadership of the Senate undertook a tour of isolation centres located at the University of Abuja Teaching Hospital, Gwagwalada.

Lawan, while speaking to journalists after the inspection, bemoaned the poor preparation and expressed frustration at the state of the isolation centres which were yet to be completed.

On the findings of the Senate leadership, Lawan said: “First of all, let me say that the representatives of the Federal Ministry of Health, the NCDC and the management of the University of Abuja Teaching Hospital are in high spirits, looking determined to discharge their mandates and obligations.

“But from our inspection here, the temporary isolation centre is really not in good shape, it doesn’t look ready to receive any patient. I believe that this is something that we need to fix between now and tomorrow.

“We are in an emergency, even if we don’t have people who are affected, we shouldn’t just rest on our oars. We have to do everything and anything possible to fix that temporary isolation centre to be prepared to receive anyone who falls sick in this respect.

“I am sad, we are indeed actually sad, that of the N620 million that was supposed to be released for fixing everything here, not a kobo has been released.

“We are going to get across to the minister of finance and all the other authorities that have anything to do with this to release this money between today and tomorrow.”

The apex Islamic body in the north, Jaamatul Nasir Islam (JNI), urged the public to repent and seek God’s forgiveness following the outbreak of the virus.

In a statement by its Secretary-General, Khalid Abubakar Aliyu, titled ‘The worrisome situation of Corona Virus (COVID 19) pandemic and what is expected of a Muslim”, the JNI tasked all Juma’ah and five daily congregational prayers’ Imams to mount strong advocacy and enlightenment campaign against the scourge.

The group also urged the Imams to include in their sermons and preaching the imperatives of taking seriously precautionary measures of personal hygiene, such as constant cleaning of the environment, improving the ventilation of the Masjid and dwelling places and providing sanitizers.