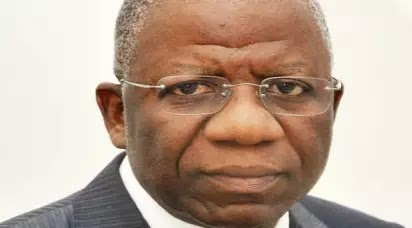 Former Head of Service of the Federation, HOSF, Mr. Steve Oronsaye, yesterday, returned to the Economic and Financial Crimes Commission, EFCC’s custody ahead of possible arraignment.

Oronsaye was arrested and detained by operatives of the anti-graft agency, Wednesday, but released late night and asked to turn in himself, yesterday.
Vanguard learnt that Oronsaye was, however, asked to go home at about 6p.m., yesterday, and asked to report back to the commission today.
A top official in the commission confirmed to Vanguard that the former top civil servant had been taken in, yesterday, and that every indication pointed to the fact that he would be formally charged before an Abuja Federal High Court.
The official said: “Yes, Mr. Oronsaye is with our operatives preparatory to his arraignment. He was allowed to go yesterday after spending a long time and making useful statement to us. He was ordered to return to our investigators today and he reported around 10a.m. today (yesterday)”
It was not clear if he would be arraigned today or not.
Vanguard learnt that apart from being associated with the mismanagement of huge pensions funds, Oronsaye is being investigated over allegations by top Federal Government officials that he used his position as the chairman of the Presidential Standing Committee on Financial Action Taskforce to fleece the government.
The anti-graft agency source said: “Oronsaye is also being interrogated on fresh allegations of monumental fraud and embezzlement of funds in the running of a Presidential Standing Committee on Financial Action Taskforce, which he chairs.
“The committee is a policy advisory body to the President on the implementation of the AML/CFT. Oronsaye allegedly used it as a conduit to siphon and launder money.
“This fresh lead is triggered by allegations by some members of the committee who claim that Oronsaye operated an illegal account in a first generation bank in the committee’s name without the knowledge of the members through which he has laundered hundreds of millions of naira.”
The renowned bureaucrat has earlier been questioned in relation to the September 2014 damning 169-page report by the office of the Auditor General of the Federation claiming that Oronsaye mismanaged over N123 billion during his tenure as HoSF.
The report, entitled “Special Audit of the Accounts of the Civil Pensions,” found Mr. Oronsaye guilty of allegedly presiding over the looting of the nation’s resources during his tenure.
(Vanguard)