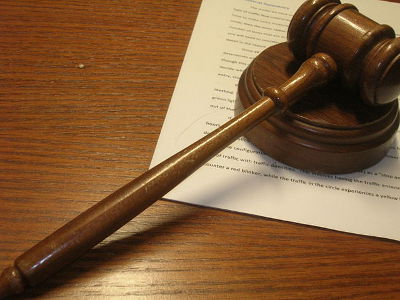 Ikorodu magistrate court sitting in Ijede  sentenced her husband, Olayinka, to nine years, six months imprisonment for impersonation.Soyinka (34) was arraigned on a five count charge bordering on falsely presenting himself as a lawyer, stealing and forging of court documents before Magistrate R.O. Davies by the Police prosecutors, Aminu Isaac and Etim Ufoh Ikechukwu on February 16.The matter was later taken over by a prosecuting team of the Nigerian Bar Association (NBA), Ikorodu Branch led by Prince Adetayo Ladega. Others are Mr Nurudeen Ogbara, Dapo Akodu, Mr Temitayo Sammy, Mrs Odunola Jegede, Mrs M.I. Akanbi Salisu, Mr Ezekiel Ogbaide and Prince O.S.A. Aranmolaran.The convict had in the course of trial changed his not guilty plea to guilty consequent upon which Magistrate Davies pronounced a total of nine and half years imprisonment on him.Magistrate Davies sentenced the convict to six months imprisonment on the first count and three years each on counts 3, 4 and 5.

The convict would, however, spend three years in prison as the magistrate said the sentences would run concurrently.Earlier, in his allocutus, Soyinka, through his lawyers, Shakiru Omolaja and Opeyemi Omoboye, had pleaded for mercy of the court, stressing that the convict has repented as evident in his plea and that since he is still young, first offender who can still  be useful to the society.But the trial magistrate said it would be unfair to sacrifice justice on the altar of sympathy emphasising that the matter would be decided on facts, issues and evidence before the court.He held that it would be wrong to allow sympathy to becloud the essence of justice, truth and fairness.Magistrates Davies pointed out that the convict by “his statement before the court is a graduate and should know the consequences of his offence. So, this is a self inflicted injury”.Lead prosecuting team of NBA Ikorodu branch, Prince Ladega thanked the court and promised that the bar would take step to preserve the legal profession as directed by the court.Olajide was arrested February 14 while plying his trade with an unsuspecting client, Nwokeyi Lukman and subsequently arraigned two days after.

In the charge read before the court on arraignment, Police prosecutor, Inspector Etrimudor Ikechukwu who stood in for Inspector Isaac Aminu, alleged that the defendant obtained the sum of N550,000.00 from Nwokeyi Lukman with intent to procure court dissolution of marriage document which he knew was false.He was alleged to have forged a document of marriage dissolution from high court of Lagos State in suit number LD/193HD/2015 and falsely presented himself as a lawyer with intent to defraud his victim.The offences committed were said to be contrary to and punishable under sections 285, 312, 363(1), 378(1) and 401of the Criminal Laws of Lagos state 2011.Source : The Nation