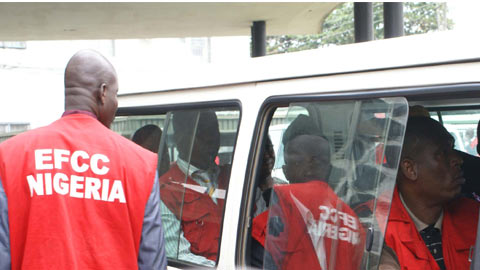 The Economic and Financial Crimes Commission (EFCC) has laid its hands on a bank account with over N2.5billion opened in the name of a former female minister’s housemaid.
Investigators of the anti-graft agency believe the account was opened by the former influential minister in the name of the housemaid as part of the effort to cover her track.
However, preliminary investigation has shown that the former minister   is the sole signatory to the account, The Nation gathered authoritatively yesterday.
A highly placed EFCC source said yesterday that she would be brought to justice.
“Our findings indicated that the ex-female minister opened an account in the name of her housemaid and with her photograph. But the signature in the account is that of the ex-minister,” the source said.
“At the time we made the discovery, over N2.5billion was in the account. But the volume of transactions in the account has been huge.
“We are suspecting that the ex-minister did not put the housemaid in the picture of what she wanted to do with her passport photograph.
“We have established that the ex-minister has been drawing funds from the said account. We have retrieved records of all transactions by the ex-Minister. We will soon bring her to justice no matter how long it takes to follow due process.”
The EFCC, it was also gathered, has secured a court order to detain Abiodun Agbele (Alias Abbey), an associate of Governor Ayodele Fayose of Ekiti State.
Agbele was arrested during the week in respect of ongoing investigation into how about N4.745billion of the $2. 1billion arms cash was diverted to a former Minister of Defence, Mr. Musiliu Obanikoro and Governor Fayose.
The cash was allegedly sourced from the SAS Imprest Account of the Office of the National Security Adviser (ONSA) under ex-NSA, Col. Sambo Dasuki prior to the conduct of  the  June 21,2014 Ekiti Governorship poll.
About N1.219billion was allegedly disbursed to Fayose through Abiodun Agbele and De Privateer Limited which is owned by the associate.
The ONSA allegedly wired the N4.745billion via Sylvan Mcnamara Limited, a phony company allegedly run by the Obanikoros.
Said a source, “We have obtained a remand warrant from the court to detain Agbele; who was central to the collection and sharing of the N1.219billion into the accounts of Fayose and other beneficiaries.
“His arrest has enabled us to get to the root of how the funds came about and the disbursement formula.
“When presented with records of transactions and accruing tellers, the suspect admitted carrying out the transactions. He is helping our investigation and we will soon reveal the details to the public.”
Before Agele’s arrest, investigation had uncovered that:
“The N1, 219, 490,000 was not deposited in any account but it was kept in a vault in the bank. It took the bank officials about 10 days to count. The bankers refused to make entry until it was counted,
“Shortly after confirming the figure, Abiodun Agbele was used to coordinate the disbursement of the funds. On June 26, 2014, the wanted associate (Abiodun Agbele) paid N137million into Ayodele Fayose’s account 10003126654 with Zenith Bank through Teller-0556814. Fayose’s BVN on the teller is 22338867502. On August 22, 2014, he paid N50million into the same account. By the records from the bank, Abiodun Agbele paid another N118, 760,000 into Fayose’s account on 27/8/14.
“Based on the transfers, Fayose moved N300million to a Fixed Deposit Account No 9013074033 with Zenith Bank at 15, Olusola Abiona Street, Olorunda Estate, Alapere Ketu. He has the same BVN-22338867502.
“After that, Abiodun deposited another N100million from the N1, 219, 490,000 into Spotless Hotel Account run by Fayose and his wife, Helen Olayemi Fayose with Account No. 1010170969, Fayose’s BVN is 223338867502 and his wife’s BVN in the account is 22298990256.
“The governor and his wife are the two directors and signatories of Spotless Hotel account.”
In the course of the investigation, the EFCC team dug up how De Privateer Limited (a company owned by Abiodun Agbele) with Account No. 1013835889 received the sum of N219, 490,000 on June 18, 2014.
“On June 19, 2014, the same account received N300million and another N200million on June 23, 2014. The BVN of the account is 22235692890.”
The Nation