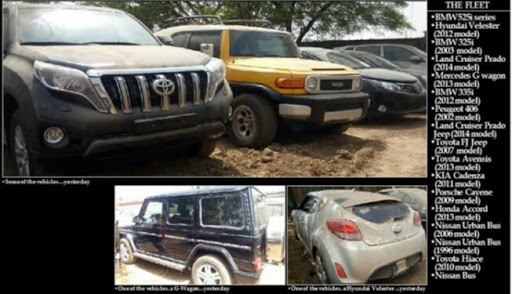 The Economic and Financial Crimes Commission (EFCC) has recovered 17 exotic vehicles in a warehouse belonging to a former Comptroller-General of the Nigerian Customs Service (NCS), Alhaji Abdullahi Dikko Inde.The warehouse on Nnamdi Azikwe Street, Kaduna, has been sealed off.Two suspects – Dantala Mohammed and Ahmed Balarabe –  have been arrested in connection with the recovery.EFCC spokesman Wilson Uwujaren said the vehicles were retrieved following an intelligence report.The EFCC, in a statement, said: “The recovery was sequel to an intelligence report the Commission received that stolen money and properties suspected to be proceeds of crime were being warehoused at the former Customs boss’ premises.

“Upon receipt of the intelligence, a team of operatives from the Kano Zonal Office of the EFCC were deployed to investigate the matter. ”On arrival at the location, two individuals who were identified to be the custodians of the property – Dantala Mohammed and Ahmed Balarabe were presented with a search warrant.“In the course of the search, a total of 17 vehicles, among which are brand new cars, shuttle busses and SUVs were found in the premises. ”Consequently, the vehicles and the two individuals were conveyed to the Commission’s zonal offices in Kaduna and Kano respectively. Investigation revealed that the warehouse in question actually belongs to the former Customs boss.“The two suspects arrested are in custody assisting the EFCC in investigation.” The particulars of the vehicles recovered is as follows:

xvi. White Toyota Hiace Bus, 2010 model with chassis number JTGJXO2P4B5020268.xvii. White Nissan Bus, 2009 model with chassis number JNITA4E250011697.The EFCC quizzed   Dikko  on June 16, last year over alleged N42billion fraud. He was not detained due to his alleged ill health.The EFCC also traced how about N2.6billion was withdrawn from NCS’s coffers and remitted into the accounts of some companies floated by a former Assistant Comptroller General of Customs who served under Dikko.EFCC asked Dikko to explain the sources of funds with which he acquired a N2billion mansion at 1, Audu Ogbe Street, Jabi Abuja.Dikko is believed to have refunded about N1,040,000, 000 to the Federal Government.A highly-placed source said:  “The operatives of the EFCC have been able to establish that Dikko’s Jabi mansion was funded largely through kickbacks from Customs contractors.“For instance, it was learnt that the N100million used to purchase the land on which the mansion sits was provided by a Customs contractor. Ditto for the first tranche of N650m used in the construction of the gigantic building.“These funds were allegedly paid to Dikko’s personal lawyer by the contractors. The Lawyer in turn transferred the funds to the engineer handling the construction of the building. Both the lawyer and the Engineer allegedly admitted their role, claiming they acted on the instruction of the former CG.“Also, operatives of the Commission are looking into how a former Assistant Comptroller General of Customs under Dikko, got paid over N2.6billion, which were remitted into accounts of companies floated by the officer from the customs coffers.”The Nation