There was a 20 per cent reduction in the volume of road traffic offences during this year’s Easter holidays compared to last year’s, the Federal Road Safety Corps, FRSC, has said.
The Commission said the improvement is as a result of a relentless sensitisation of motorists on the need to prioritise their safety first whenever they use public roads.
This was revealed during a press conference held by the Commission’s Corps Marshal, Boboye Oyeyemi, at his office in Abuja, the Federal Capital Territory, on Friday.
“Within the 6 days that the special operations lasted, a total of a total of six thousand, two hundred and twenty three (6, 223) traffic violators were apprehended, while the number of offences committed were seven thousand, four hundred and eleven (7,411).’
Mr. Oyeyemi said the number of fatal crashes between 2015 and 2016 Easter periods has also witnessed significant improvement.
“In the same vein, the number of road traffic crashes recorded within the period were ninety eight (98), while the number of people involved were six hundred (600). Unfortunately, seventy seven (77) people lost their lives during the operations, while three hundred and fifty eight (358) sustained various degree of injuries.”
Compared to last year, Mr. Oyeyemi said, the figures in 2016 reduced by 15 per cent for crashes, 32 per cent in the number of people involved, 9 per cent in the number of casualties and 23 per cent in the number of injured travellers.

“Furthermore, while 115 crashes were recorded in 2015, this decreased to 98 this year, making a reduction of 15 per cent. In terms of number of people involved in crashes, while 885 people were involved in 2015, this reduced to 600 this year, making a 32 per cent reduction. In addition, while the number of people killed in 2015 were 85, this reduced to 77 this year, making 9 per cent reduction. Again, while 463 people were injured in 2015, this reduced to 358 this year, making 23 per cent decrease.”
Mr. Oyeyemi credited the recorded improvement to the fact that road users are now adhering to basic traffic instructions like the use of seat belts
“In the course of the operations, our teams nationwide observed that the public enlightenment programmes combined with enforcement strategies we have embarked upon have started yielding positive results in some areas.
“For instance, we observed that front seat passengers now use seat belts more than before, as compliance level of this category of passengers has gotten to about 95%.”
However, Mr. Oyeyemi said, despite repeated public sensitisation efforts of the FRSC over the years, the Commission still observed that many Nigerians have refused to obey safety instructions.
He said many drivers still ignore speed limiters, make telephone calls while driving, recklessly shunt lanes and pay little attention to lighting.
“There are also challenges among the drivers of private cars who continue to violate speed limit against the safety regulations, while some drivers engage in the use of mobile phones while driving.
“Among drivers of articulated vehicles, there were more offences of the lane indiscipline and using faulty lighting system which create hazards to other road users, especially in the night.”
Mr. Oyeyemi also decried wanton attacks from commercial road transport operators who he accused of perpetrating violence against FRSC officials on the road, warning that any driver that physically assaults his men will face maximum punishment.
“We’ve observed that commercial drivers have continued to physically attack my men on the road and I want this warning to go out to them that we will no longer tolerate this,” he said.
“Any driver caught to have assaulted my officers will face maximum penalty under the law.”
Mr. Oyeyemi urged the general public to desist from acts that could put them in danger while on the road.
“Our ultimate aim is to get people to obey traffic rules and end all activities that could put their lives in danger,” he said. “The safety of Nigerians is of paramount importance to us.”
Premium Times 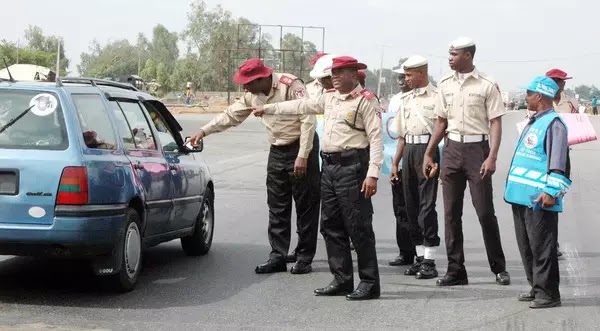