…FG raises fresh allegation of N8.4bn fraud
Court adjourns to Dec. 14
For the second time, the Federal High Court sitting, in Abuja yesterday ordered that the founder of DAAR Communication PLC, Chief Raymond Dekpesi, be remanded in the custody of Economic and Financial Crimes Commissions, EFCC, till December 14, when ruling on his application for bail would be delivered.
This was even as the Federal Government said it is investigating fresh allegations of N8.4bn Dokpesi allegedly collected for airing the FIFA U-17 championship which Nigeria hosted in 2009.
Justice Gabriel Kolawale, who heard the motion for his bail yesterday, said the ruling could not be immediately delivered because the process filed by the Federal Government and Dokpesi’s lawyer were delivered to him yesterday in the open court.
The judge said he needed time to study the argument canvassed for and against bail application so as to arrive at a just conclusion in his ruling.
He subsequently ordered that the media guru remain in EFCC custody and must be produced on Monday, when the ruling in his bail application will be decided.
Earlier, while arguing the bail application, Chief Mike Ozekhome, SAN, told Justice Kolawale that the offence with which Dokpesi is standing trial was bailable by law, because it was not a capital offence.
He said Dokpesi has not in any way contributed to any act of insurgency and that he would not jump bail if granted.
Ozekhome also told the court that his client was billed to travel abroad for medical checkup when a telephone call came in, inviting him orally to come to EFCC and that without any hesitation, he responded and honoured the invitation as a law abiding citizen.
Beside, Ozekhome told the court that Dokpesi’s son was billed to wed on December 17 and 19 and that as a father, he has differed invitations to highly placed Nigerians and as such he would be around at all times to stand trial.
Similarly, the counsel also submitted that Section 36 of the 1999 constitution presumed his client innocent until the contrary has been proved by the prosecution.
However, opposing the bail application, Rotimi Jacobs, SAN, who is prosecuting the trial, urged the court to reject the application on the grounds that the Federal Government is investigating fresh allegations of N8.4bn he collected for airing the FIFA U-17 championship which Nigeria hosted in 2009.
Jacob further told the court that the airing right was giving to DAAR communication by FIFA and the Federal Government was not a party to the contract.
He added that if bail is given, it will prejudice investigation of the allegation and urged the court to take a judicial look at the affidavit evidence of the Federal Government, which indicated that no contract paper was exchanged by Dokpesi and any agent of government when the money was paid to him.
On the state of health of the accused, Jacob told Justice Kolawale that Dokpesi failed to disclose the nature of his illness. He added that the letter of appointment with physicians exhibited by Dokpesi was sent on December 5, when he was already in the custody of EFCC, including the British airways ticket.
The prosecution counsel said it would be dangerous to admit Dokpesi on bail because he risked jail term of seven years upon conviction and as such may decide to flee the country. The ruling will be delivered on Monday.
Meanwhile, former Chairman, Presidential Implementation Committee on Maritime Security, Air Vice Marshal Saliu Atawodi yesterday denied any link with the controversial $2.1bn arms purchase deal under which former National Security Adviser, Col. Sambo Dasuki (rtd) is being detained by EFCC.
The former air chief claimed that he has never worked under Dasuki in the office of NSA and as such has nothing to do with the huge sum allegedly mismanaged. Atawodi’s reaction was sequel to the usage of his photograph in some national dailies along with those already indicted by the Presidential Committee that probed the alleged arms purchase deal.
Speaking to judiciary correspondents in Abuja through his lawyer, Wahab Olatoye, Atawodi advised that he should not be linked with any negative issue he knew nothing about while in and outside office.
Olatoye further stated that it was mischievous, embarrassing and unwarranted for anybody or group to have dragged his client into the alleged scandalous arms deal, adding that he had served the nation for years without any blemish record.
His lawyer however admitted that a petition was written against his client in 2012 while he served as the chairman of PICOMMS under the late NSA, Maj. Gen. Owoye Azazi and that the petition after a thorough probe was thrown out by the investigating body.
Olatoye insisted that his client was never indicted by EFCC, ICPC or any other investigative panel and wondered why the retired air marshal could be linked to an issue in which he had not in any way participated or involved.
National Mirror 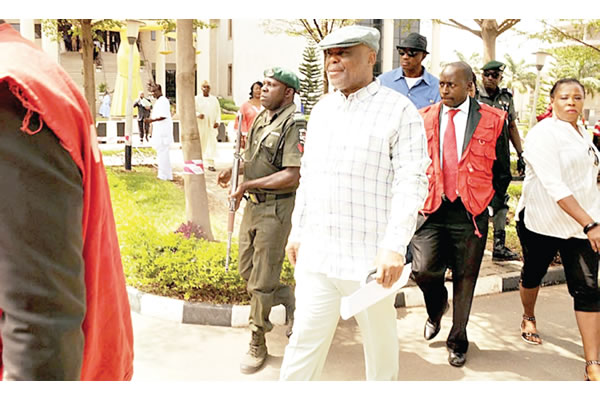