Gordon Obuah and Jonathan
Obua, who has been detained by the SSS in Abuja since the night of July 16, had embarked on hunger strike to protest the conditions of his detention. He was denied access to outsiders, including his doctor, lawyer and family members – and his lawyer claimed on Sunday that Obua was also denied his medications for hypertension and diabetes.

The effect of the hunger strike took its toll on the detainee on Monday and he fainted, according to an SSS source, leading to speculations that Obua had died.
The source added that Obua was taken to the hospital and was treated and discharged on Monday, after which he was returned to SSS headquarters where he is being detained.

It is unclear if Obua has been allowed access to his medications. The SSS is yet to officially comment on the detention of Obua, who served as CSO to Jonathan from 2010 to 2015. 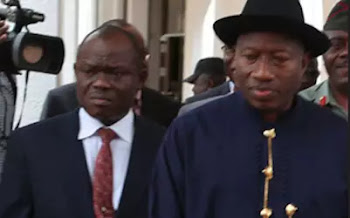