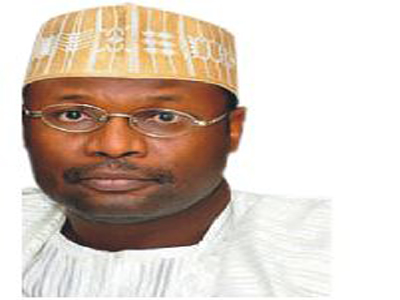 The Chairman of the Independent National Electoral Commission (INEC), Professor Mahmood Yakubu, at the weekend said the issue of who flies the banner of the Peoples Democratic Party (PDP) in the Edo governorship election does not rest with the commission. He said that is for the judiciary to decide.
The INEC boss, while speaking during a working visit to the headquarters of Vintage Press Limited, publishers of The Nation newspapers in Lagos, said given the numerous numbers of cases currently in court over the leadership of the PDP and the party’s governorship ticket in Edo, it is only the court that can have the final say on who the governorship candidate of the party would be.
While explaining why the commission listed Pastor Osagie Ize-Iyamu as the PDP candidate when it released the list of candidates for the September 10 election, Yakubu said the decision was based on a subsisting court order. According to the INEC boss, the commission merely obeyed a court order by listing Iyamu as the candidate.
“They say they have numerous cases in court. I told you earlier that within a period of three days we got five judgments and orders. In fact, one order came with a threat that if we did not do what the court says we should do, we will be committed for contempt. At the moment, on the basis of the judgment of the Port Harcourt High Court, we accepted the nomination from the Makarfi led caretaker committee.
“We have to submit the name of a candidate by the 11th of this month. But, when we did so, we put in bracket, court order. Again, Ize-Iyamu has dragged INEC to court and was granted an interim injunction by the judge saying that we should maintain status quo. So, apart from the leadership tussle in the state, there is this one about candidacy in Edo State.
“At the end of the day, it has nothing to do with the political party but who flies the ticket of the party. Our job is to obey court orders. If tomorrow the court says someone else is the candidate, we will obey. And if there is no resolution before the election, we will go into the election with the PDP and if the party wins, let the court resolve who shall be sworn in,” he said.
The INEC helmsman also lamented the difficulty in conducting credible election in the country and blamed it on the penchant of Nigerian politicians to engage in what he described as “do or die” politics. He then advocated the creation of an electoral offences tribunal to handle cases of electoral malpractices.
“INEC has no police and cannot arrest offenders, we cannot make arrest, we can work with the police and not arrest. We have to investigate the office so allow successful prosecution. INEC has no power to conduct investigation, it is purely and election management body.
“So what is the way out? Two committees set up by the federal government in 2008 and 2011, made a very important recommendation that the electoral offences tribunal should be established. But nothing has been done about that recommendation till date. In 2011, the government accepted the recommendation and issued a white paper and directed the Attorney General at the time to establish election offences and tribunal commission, but nothing has been done. Are we waiting for another upheaval to set up another committee and to put the recommendation in the cooler?”
Yakubu said the commission at best, is discussing with the National Assembly with a view to seeing to the establishment of the much needed tribunal. “We have been discussing this with the National Assembly because only the assembly can amend the electoral act to establish the commission,” he said.
He confessed that elections in the country have become tougher. According to him, “Something has happened to our democracy that we have probably not realized, with two strong political parties; competition has become fiercer now. The two political parties in most cases have also fielded strong candidates, making the elections highly competitive. The first election, we conducted was Kogi governorship election. It was a contest between two strong candidates; an incumbent governor versus a former governor.
“Bayelsa governorship election was also a contest between a sitting governor and a former governor. The Rivers election, even though is a constituency election, was ultimately a contest between a former governor and the incumbent governor. Though they are not candidates in the election, they virtually call the shots. So, it has become very competitive and the vote can now count more than before,” he explained.