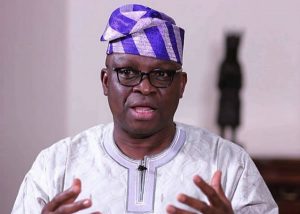 The Federal High Court sitting in Ado-Ekiti, the Ekiti state capital, has scheduled December 2 for a judgment on the on-going case between Governor Ayo Fayose and the Economic and Financial Crimes Commission (EFCC) over the seizure of the governor’s accounts with Zenith Bank.

Fayose’s lead legal counsel Mike Ozekhome in a counter-affidavit prayed the court to de-freeze Fayose’s accounts on grounds that the EFCC suppressed the fact while attempting to obtain an ex-parte order freezing the accounts from Justice Idris of Lagos Federal High Court on June 24.

Ozekhome had said that the EFCC suppressed the significant fact that the owner of the accounts presented for freezing is a sitting governor who enjoins immunity from criminal and civil proceedings according to law.

He added that the governor’s accounts would not have been frozen if the judge had been aware that the order obtained was that of a sitting governor.

Countering Ozekhome’s claims, EFCC’s lead counsel, Rotimi Oyedepo, argued that what the anti-graft agency had done in freezing the governor’s accounts was, in his words, “merely to preserve the rest of the money in the accounts so that the first respondent (EFCC) will not be prejudiced by the conduct of the applicant (Fayose) ‘allegedly’ aimed at dissipating the proceeds.”

Oyedepo further argued that, contrary to Ozekhome’s claims that the EFCC lacks the power to freeze Fayose’s accounts, “by the provisions of sub-section 5 of the EFCC Act, the first respondent (EFCC) or any of its representative, such as the investigative officers, has the power to instruct the second respondent (Zenith bank) to place a stop order on the accounts. After the expiration of the 72 hours, as contemplated on section 6:5 B, the first respondent obtained the order of the learned brother on the 24th of June, 2016, empowered the first Respondent pursuant to section 34 of EFCC Act, to freeze four different accounts in custody of the Second Respondent.”

Justice Taiwo held that the counsel to Zenith Bank cannot align itself with EFCC on the matter, and has to abide by the decision of the court, as the bank had failed to react to any of the affidavits and counter-affidavits filed by both parties.

Judgement on the matter would be delivered on December the second