Baring any unforeseen circumstances, the coroner inquest into the Synagogue collapse building will today deliver its final verdict at the Coroner court, Ikeja.
The coroner court, presided over by Chief Magistrate Oyetade Komolafe, fixed the July date after parties in the quest had adopted their final written addresses earlier submitted to the court.
The Lagos State Government had inaugurated the Coroner’s Inquest under the state Coroner’s System Law No.7 of 2007 to investigate the cause and circumstances resulting in the death of 166 people following the building collapse of September 12, 2014, and bring its findings and recommendations to the appropriate authorities.
For the period the inquest lasted, the General Overseer and founder of Synagogue, Prophet Temitope Joshua, who was summoned by the coroner refused to show up.
Instead, Joshua challenged the jurisdiction of the court by filing an application dated November 11, 2014 and marked ID/188MJR/2014 before the High Court, seeking a judicial review of the Coroner’s Inquest into the September 12, 2014 collapse.
He had asked the court to declare that the coroner had exceeded its  court jurisdiction by delving into areas beyond its scope.
Even though Justice Lateefa Okunnu dismissed Joshua’s application, the clergy did not still appear before the coroner court as his counsel filed an appeal to challenge the high court’s ruling.
In his final address, counsel to SCOAN, Mr. Olalekan Ojo insisted that the church cannot be blamed for the collapse.
Lagos State Government in its submission urged the inquest to be guided by section 40 of the Coroners Law which bestows on it the role to find out who the deceased are, when and how they died.
Other parties who also submitted and adopted their final written addresses include the Building Collapse Prevention Guild (BCPG), the Nigeria Police and Standard Organization of Nigeria (SON).
(Vanguard) 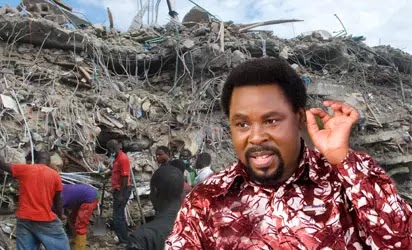