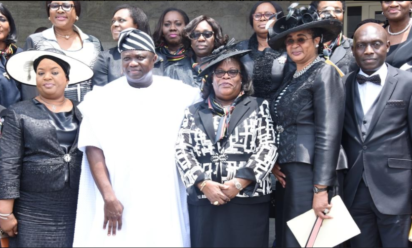 Governor Akinwunmi Ambode has sworn in three judges for the Lagos State High Court. The judges were presented to the Bar last Friday, reports JOSEPH JIBUEZEThe number of judges of the Lagos State High Court rose to 57 with the swearing in of three new ones by Governor Akinwunmi last Wednesday.Justice Elizabeth Idowu Alakija, Justice Emmanuel Olugbemiga Ogundare and Justice Serifat Oloruntoyin Solebo were presented to the Bar last Friday by the Chief Judge (CJ) Justice Olumifun-milayo Atilade.The CJ expressed optimism that the judges would strengthen the judiciary’s capacity, adding that their presentation to the Bar was in recognition of the fact that the Bench cannot exist in isolation.She believes the newly appointed judges are “competent and suitably qualified”, adding that she did not doubt their ability to effectively discharge their statutory duties.

“Having a clear understanding of the peculiarity of Lagos State, you will agree with me that the services of these fresh brains are most required, even as we crave for more able hands to enable us deal effectively with the ever increasing volumes of litigations in the state,” she said.Justice Atilade called for the Bar’s support, saying judges cannot succeed without lawyers’ cooperation.“Building on the strength of our achievements over the years, I want to assure you of our firm commitment to justice and excellence in service delivery.“In the same vein, our doors remain open to all members of the Bar for necessary suggestions, complaints and positive contributions,” she said.Justice Alakija

Justice Alakija was born on February 24, 1959 in Manchester, England. She attended Queen’s College, Yaba from 1971 to 1975 and studied Law at the University of Lagos (UNILAG) from 1980 to 1983 after her advanced level at Lansdowne Tutors, London.She obtained a Masters in Commercial and Corporate Law from the University of London in 1995, and also attended the Harvard School of Health and Human Rights in Boston.She was the Director of Public Prosecution (DPP) in Lagos State from 2014 to March, this year. She joined the Ministry of Justice in 1986 as Administrator-General and Public Trustee. She sreved in the directorates of legal drafting, civil litigation and citizens’ rights. She was the pioneer head of the Citizens Mediation Centre.Justice Ogundare Justice Ogundare was born on August 5, 1965 in Iyin-Ekiti in Ekiti State. He attended the Baptist Academy and obtained his law degree from UNILAG in 1990. He also holds in Masters in Law from the same university.He was appointed a magistrate in 1996 after serving as an associate in the firm of Shina Adedeji and Co. He later became the Chief Registrar of the High Court of Lagos after serving as Deputy Chief Registrar. In 2003, he won the Chief Judge of Lagos merit award.Justice Ogundare is a member of the Chartered Institute of Arbitrators and the Chartered Institute of Taxation, among others. Justice Solebo Justice Solebo was born on November 28, 1957. She studied Law at UNILAG, graduating in 1995. Two years later, she bagged her Masters in Law from the same institution. After working in the firm of Adekunle Tuyo and Co, she was appointed a magistrate in 1999, rising to the position of Chief Magistrate/Deputy Registrar.As a magistrate, she served in the Juvenile/Family Court and at the Lands Registry. She was also deputy registrar of titles and deeds until November 2009.Justice Solebo also served as the District Coroner in Mushin, as well as member of the Local Government Election Petition Tribunal. He education included training as a Confidential Secretary at Pitmans College, London. Expectations Chairman, Lagos Branch of the Nigerian Bar Association (NBA) Martin Ogunleye and a Senior Advocate of Nigeria (SAN), Sylva Ogwemoh, said they expected the new judges to do justice without fear or favour.“We congratulate the newly appointed judges and wish them a successful tenure. The expectations of the Bar in Lagos is that the new judges would complement the efforts of all stakeholders to ensure that justice is dispensed fairly, efficiently and timeously,” Ogunleye said.On the relationship between lawyers and judges, the chairman said: “The Bar and Bench relationship in Lagos State has been and continues to be cordial and symbiotic.“It is our goal to continue to work together with the judiciary to ensure that Lagos continues to be the model of justice dispensation in Nigeria.”Ogwemoh urged the judges to stick to their oath of office.“We expect that they will apply the law to the facts as it should be. From what is going on now, we’re all aware that two things are no longer tolerated: corruption. Judges should not focus more on doing justice based on the facts and the law no matter whoever is involved, whether the state is involved, or any individual is involved or a person of high class is involved,” he said.Ogwemoh agreed with the CJ that more hands are needed on the Bench.“If you go to a typical court any day, you will find over 20 cases on the list for the day. Lagos is the commercial centre of Nigeria. With what we’re seeing in Lagos, we still need to do more to bring in more hands to the Bench so that we can have judges dealing with fewer cases and then we can have justice dispensed speedily,” the SAN said. Ambode promises reforms Speaking at the Banquet Hall of Lagos House in Ikeja, venue of the swearing-in, Governor Ambode said the occasion, which was the by his administration, signified another milestone in his commitment to enhance the quality of life through a justice administration system that is just and fair.Promising reforms, he said: “In the end, we hope to bequeath a more vibrant and qualitative judiciary and justice sector fit for the 21st century and beyond. It is also my hope that with the caliber and qualities of these new learned personalities, our bench will be further enriched to effectively discharge its constitutional functions and deliver hope and justice to our people.”