The Economic and Financial Crimes Commission (EFCC) yesterday arrested former Akwa Ibom State governor, Senator Godswill Akpabio, over alleged N108.1 billion fraud.
The ex-governor, now a senator, was also accused of mismanaging the state’s funds, and plunging it into huge debt.
About N18 billion of the said sum was allegedly lavished on special services, reception of very important guests and sundry items.
The ex-governor was also said to be under probe for allegedly acquiring five choice buildings in Abuja and Lagos.
But Akpabio last night denied being arrested by EFCC.

He said he went to the anti-graft agency on his own volition to respond to a petition that was filed against him.
According to investigation, Akpabio was picked up in Abuja after a two-week surveillance had been carried out on him.
A top source in the EFCC, who spoke in confidence, said: “We have picked up the ex-governor based on some petitions against him. One of the petitioners alleged mismanagement of about N108.1 billion. Others have visited the EFCC to adopt their petitions and show that they are not anonymous.
“Akpabio has been under investigation for some time. At a point, he got intelligence report that we were after him, and he has a peculiar security ring around him.
“But we have got to a convenient bend to arrest him for interrogation on some of the allegations already isolated for him.
“Akpabio is already in custody where our operatives are interacting with him. This is just the first leg of his grilling by the commission.”
It was not immediately clear if Akpabio would be granted bail last night.
Responding to a question, the source said: “The EFCC had interacted with some of the petitioners. Fairness demands that Akpabio should be invited.
In a June 22, 2015 petition to EFCC, an Abuja-based lawyer and activist, Leo Ekpenyong had accused Akpabio of sheer waste in office.
The petition alleged that between January and December 2014, the trio of Godswill Akpabio, an ex-aide of his and another associate made illegal but substantial withdrawals of cash from a designated state government-owned account with Zenith Bank with account number 101037588, amounting to N22.1 billion.
“It is worthy of note that reasons for such ungodly cash withdrawals against financial regulations and due process laws range between sundry use and unjustifiable expenditures by Godswill Akpabio and his numerous surrogates and proxies.
“For example, a whopping N18 billion was withdrawn fraudulently from the state FAAC account with the United Bank for Africa in tranches of N10 million and above by the associate in a surreptitious manner to conceal their dishonest intention.”
“The cumulative aggregate of the monies stolen by Godswill Akpabio from the coffers of government as pocket money is the annual budget of some states in Nigeria put together.”
At press time, it was gathered that about five choice mansions have been put under searchlight by EFCC.
The top EFCC source added: “The allegation we have is that these mansions were bought by Akpabio through some fronts.
“This allegation is being looked into. If it is true, we may invoke temporary assets forfeiture clause in the EFCC Act.
“But we have to give Akpabio the benefit of the doubt to react to all these allegations against him. They might be true or false.”
Some of the choice properties, allegedly traced to Akpabio’s fronts and under probe are a mighty building at Ikogosi Spring Close, off Katsina-Ala Crescent, Maitama-Abuja; a mansionette at Colorado Close, Maitama, Abuja; a choice property at Probyn Road, Ikoyi, Lagos; another mansionette at Olusegun Aina Street, Parkview, Lagos and a 25-storey building on Akin Adesola Street, Victoria Island, Lagos.
In a swift reaction, Akpabio’s media aide, Mr. Jackson Udom, denied the arrest of his principal.
Although the statement said Akpabio only visited the EFCC, it was silent on whether Akpabio was being detained or had been released.
It confirmed that Akpabio went to EFCC voluntarily based on the petition by the Abuja-based lawyer-activist.
Udom said Senator Akpabio went to the EFCC yesterday evening on his own volition, based on some spurious allegation by one Leo Ekpenyong to the EFCC.
He said: “This evening, Senator Akpabio left his Abuja residence to honour an invitation by the EFCC.
“So the issue of being arrested is certainly out of it. Media practitioners should be able to differentiate between an arrest and an invitation so that the reading public would not be misled.”
The Nation 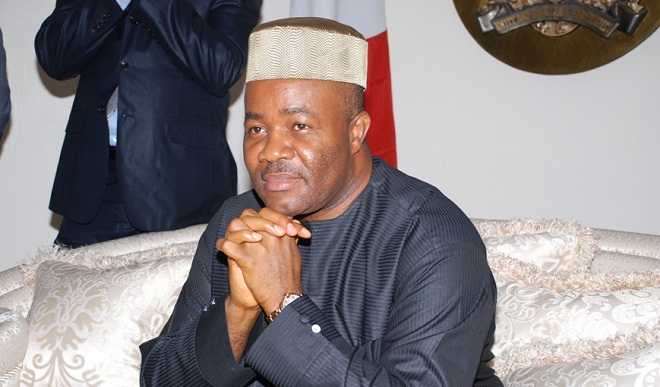