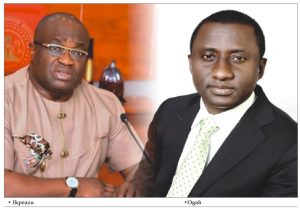 The Dr. Sampson Uchechukwu Ogah Organisation has assured Abians not to loose hope because of the judgment of  the Appeal Court in Abuja, which  on Thursday, nullified the Certificate of Return issued to Dr. Sampson Uchechukwu Ogah by the Independent National Electoral Commission (INEC), as the governor of Abia State .
The organisation said that it still has confidence in the judiciary and believes that the Supreme Court will look into the judgment judiciously and correct the anomalies.
Speaking to Saturday Sun in Umuahia, through its spokesman, Chief Joshua Ogbonnaya, the organisation said that what happened was a temporary set back, which Supreme Court would correct.
He assured Abians that God, who is still on the throne will surely prove His name, saying that, the darkest part of the night gives to daylight.
“Abians should not loose hope, they should continue in their prayers for justice to prevail in this matter”, the organisation said.
Also speaking, the Chairman of all the Coordinators  of Abia Rejoice organisation, one of the strongest support groups of Dr. Uche Ogah,  from the 17 local government areas of  the state, Hon Prosper Mba Okorie, said that the mood of Abians speaks volumes of their minds.
“Abians were not happy over the judgment because that was not what they were expecting. Many of them wept openly that the appellate court could deliver such judgment, and wondered if actually the judiciary is still the hope of the common man.  They did not understand the legal yardstick with which the judgment was delivered.
“Abia was automatically thrown into a mourning mood as many people refused to come today to do their daily businesses. They are disappointed because that was not what they were expecting, even those that pretended to be supporting the present government are not happy with this development.
Those who managed to come to the office wore long faces, Abians are indeed mourning”, Okorie said.
But in his reaction, the Traditional Prime Minster of Umudiawa Kingdom, Chief Okezie Ezigbo said that the judiciary has proven that they are transparent.
“Now that the legal battle is over, all hands must be on deck to move Abia forward, as the governor is out to deliver dividends of democracy to Abians.”
Ezigbo, who doubles as the chairman of Umuhia North LGA, said that now that the battle is over, the governor will double his efforts to ensure that he arrives at a very good result in serving Abians at very good record time”.
Reacting, the Chief Press Secretary to the Governor, Mr. Enyinnaya Apollos said that Ogah has the right to appeal and that the governor is ready to meet him at Supreme Court.
“ The court gave a thorough examination of the matter before delivering the judgment, the five justices unanimously agreed on that judgment. Majority of Abians are happy and rejoicing over the judgment, that is the reason why the governor said that he is reinvigorated to serve them more”, the governor’s spokesman said.
But, in a swift reaction, one of the PDP governorship aspirants, who appealled  the judgment of the Federal High Court, Abuja, which declared Uche Ogah  governor; Sir Friday Nwosu  faulted the Appeal Court judgment .
He said that the judgment ignored the major basis of his suit and did not consider the documents placed before them.
He contended that Ogah’s suit is an abuse of court process and ought to have been dismissed because it was pursued contrary to the rules and order of the Federal High Court.
Hear him,  “Uche Ogah’s suit is incompetent and an abuse of court process unless the Court of Appeal in Abuja is trying to say that they have changed the law contrary to the position of the Supreme Court in several decided similar cases. His suit is incompetent because it failed to comply with the rules and order of the Federal High Court which gave him seven months to serve me”, Nwosu stated.
Source : The Sun