Hearing commences Tuesday in the trial of the former Chairman, House of Representative Ad-hoc Committee on Fuel Subsidy, Farouk Lawan, for allegedly obtaining $620,000 bribe money from Femi Otedola, chairman of Forte Oil.
A reliable close to the Independent Corrupt Practices and Other Related Offences Commission said Mr Lawan and Boniface Emenalo would stand trial before Justice Angela Otaluka of a Federal Capital Territory High Court, Lugbe, on a seven-count criminal charge bordering on obtaining $620,000 from Mr. Otedola, in order to doctor a report by his then committee in favour of Zenon Oil and Gas Ltd.
The duo were first arraigned before Justice Mudashiru Oniyangi on February 2, 2013, before the judge was elevated to the Court of Appeal.
The case was then reassigned to Justice Adebukola Banjoko, and later to Justice Otaluka.
The duo were alleged to have conspired in April 2012 to demand $3million gratification from Mr. Otedola to remove his firm from the list of oil companies indicted for the fuel subsidy scam.
The prosecution team, led by Adegboyega Awomolo, had argued before the court, that the offence contravened provisions of Section 26 (1) (c) of the Corrupt Practices and Other Related Offences Act, 2000, and punishable under Section 8 (1) of the same act.
Mr. Emenalo was separately arraigned on a seven-count charge of receiving $120,000 as gratification from Mr. Otedola for the same purpose, an offence which violates Section 10 (a)(ii) of ICPC Act, 2000 and punishable under Section 10 of the same Act.
Having pleaded not guilty to the charges, Justice Banjoko had ordered the accused to continue to enjoy the bail granted them by Justice Oniyangi while their trials continued.
Mr. Lawan, who was known as Mr. Integrity before the bribery scandal broke, allegedly made several visits to Mr. Otedola to receive the bribe.
The oil mogul discreetly recorded the lawmaker and his colleagues as they received the alleged gratification.
For each of the visits, according to those who saw the clips, five video recordings, averaging a duration of eight to 10 minutes were made.
Most of the recordings were made at Mr. Otedola’s Abuja home in the Asokoro district of Abuja. Each time Mr. Farouk visited, Mr. Otedola’s apartment was secretly fitted with audio and visual recording devices by the State Security Service.
The lawmaker negotiated the terms of the bribe with Mr. Otedola over a lunch on the first visit, the sources said. He later received the first part of $250,000 on the second visit, which was around 11 p.m.
Then, he got the second part of the money on the third visit which was around 5.05 a.m.
On one of the visits, Mr. Farouk reportedly came in, sat by Mr. Otedola’s right, sorted the huge pile of dollar bills and put some in his pockets,” a source said, citing visual details of the video.
Dressed in a green agbada and a sokoto cap, the sources said, Mr. Lawan stuffed the wads in his pockets and under the cap possibly to conceal the package from Mr. Otedola’s domestic aides since they hadn’t seen him enter with a baggage.
“In the video, Mr. Lawan was clearly seen stuffing wads of dollar bills into his pocket; when his pocket was full, to the utter shock of those who watched the video, he removed his cap and concealed the remaining wads of dollar bills inside it and replaced the cap on his head,” the source said.
“Nigerians will reel with laughter if they ever get to watch this video. It is on the one hand hilarious, and on the other hand, shameful.”
Another source told of an audio telephone recording, where Mr. Otedola informed Mr. Lawan that the bribe cash had arrived at the Abuja airport, and that the lawmaker should drive there to pick the package up.
The Committee chairman reportedly responded that he won’t be able to make it to the airport himself but that he could send some of his aides along to pick the package.
Premium Times 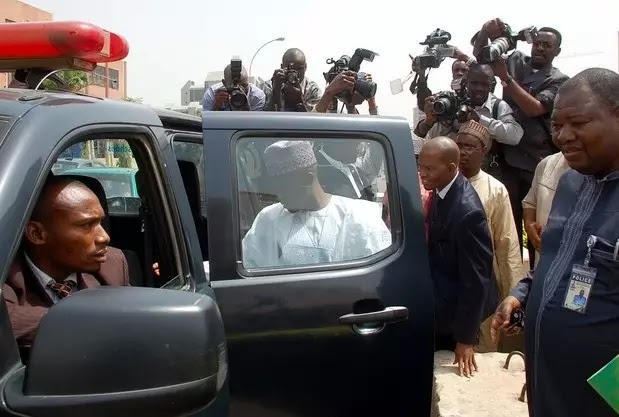