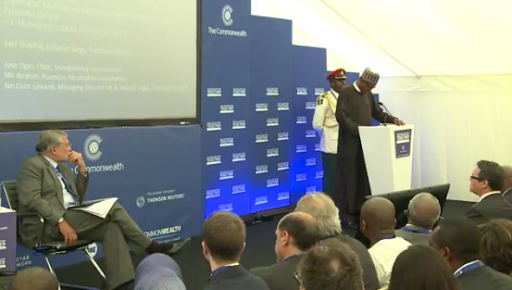 President Muhammadu Buhari has said that he would not be demanding any apology from British Prime Minister, Mr. David Cameron over his diplomatic gaffe, describing Nigeria, along with Afghanistan as ‘fantastically corrupt’. Cameron and Buhari President Buhari said instead, he would demand action from Cameron, by returning Nigeria’s stolen money and assets stashed in the United Kingdom.

Buhari made his frustration clear as he addressed a Commonwealth conference in London  Wednesday morning in the wake of Mr Cameron’s diplomatic gaffe.

Clutching a glass as he made small talk with the Queen at a Buckingham Palace reception, the PM was caught on camera being indiscreet about the countries he had invited to a key anti-corruption summit tomorrow.

The Presidency and several other Nigerians, have however, lashed back at the British PM for that scathing remark. This came as the Presidency, yesterday, expressed ‘shock’ at the unguarded comment, saying that Cameron must have been looking at an old snapshot of Nigeria. However, the president Wednesday morning refused to criticise Cameron directly when he was asked about the blunder at the conference. Instead he said he expected the UK to help him reclaim Nigerian assets that had been fraudulently stripped from the country. Buhari said: “I am not going to demand an apology from anybody. What I am demanding is a return of assets … This is what I am asking for. What would I do with an apology? I need something tangible.”

Mr Cameron’s candid comments risked causing diplomatic ructions ahead of the major international anti-corruption summit in London on Thursday. As well as Buhari, and Afghan President Ashraf Ghani is due to attend. He has also acknowledged corruption in his country and pledged to clean it up.

The gathering of the world’s political and business leaders in London will aim to ‘galvanise a global response to tackle corruption’ and is being staged in the wake of the Panama Papers leak, which revealed widespread tax avoidance among the world’s elite earlier this year.

Afghanistan is at number 166 in campaign group Transparency International’s latest Corruption Perceptions Index – second from bottom. Only North Korea and Somalia, jointly ranked at number 167, are perceived to be more corrupt. Nigeria is at number 136.Vanguard