Three pastors and a woman, who operates a private school in Yenagoa, Bayelsa State, were paraded, on Wednesday, as operatives of the Department of State Services, DSS, smashed a child trafficking syndicate operating in the state.
Thirty six children, whose ages range from five to 14 years, were rescued  by operatives of the DSS in the state from homes where they were being used as house boys and girls.
Those paraded were Dauda Nurugada, 32, from Kebbi State; Anthony Onwebeyi, 53, from Anambra State; Benaalim Isa-Garba, 43, from Kaduna State and Mrs Tombra Alazigha, 38, a school proprietor.
The Assistant State Director of Security, Mr. Friday Onuche, while addressing newsmen at the state headquarters of DSS, said the children were rescued from homes in Yenagoa and Kaiama in Bayelsa State, Enugu-Agidi in Anambra State and Port-Harcourt in Rivers State.
He said the kingpins operated under the guise of missionaries and Non-Governmental Organisations, NGOs, and target vulnerable children largely from the northern part of the country.
Among the places targeted by the traffickers, he said, include Zuru ethnic group in Kebbi and Zamfara states and Zaria in Kaduna State, where they approach poor parents to allow them send their children to school.
Mr. Onuche said the children rather than go to school as promised, ended up as house helps or hawkers.
He said: “There is the need, therefore, for members of the public to be sensitised on the need to be circumspect in the way they give their children or take in children from such unsuspecting modern slave traders.”

However, Pastor Anthony Onwebeyi, in an interview, said he was not a trafficker but a missionary assisting children to get back to school.
He said he only collected some small amount of money as transport fares from those who got custody of the kids.
The only female suspect, Mrs Tombra Alazigha, who said she runs both a private school and an NGO, which takes care of vulnerable children, said she had six of the children in her custody and that they were all brought to her by the pastors.
She, however, denied using them as housemaids, adding that they attended her school together with her six other children from her meagre earning as a civil servant and a school proprietor.
She displayed before journalists a photograph of one of the girls in school uniform and also letters purportedly signed by the parents of the children.
However, one of the children, who simply identified herself as Jessica, aged 12, said she was denied access to school and was being used for farming and hawking, among others.
Vanguard 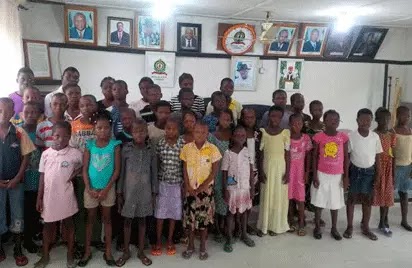